Of apes, men and a lot more 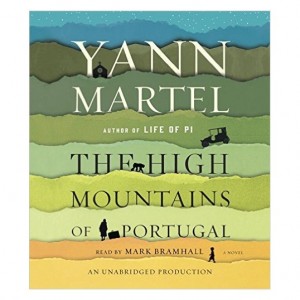 I have not read the other books that Yann Martel has written since his much loved and honored Life of Pi, first published in 2001 and made into a movie in 2012 But I have read The High Mountains of Portugal, and, while it can be difficult for an author’s later works to live up to a smashing success, this new novel is a good book that provides both entertainment and reasons to reflect on the human condition.

This book, like Pi, blends adventure with symbolism, fantasy, spirituality and enigmatic storytelling. This one, like Pi, deals with the relationship between humans and animals, with chimpanzees talking the place of the tiger Richard Parker. And this one also involves a journey, with an unlikely auto rattling across Portugal in place of a boat drifting over the ocean. Despite some similarities however, this is a very different, highly original and imaginative book.

The High Mountains of Portugal is three novellas spanning most of the 20th century. These three tales are connected by setting and in other ways, some concrete and some less tangible. Each is different from the others, and all are fascinating.

First we have a quixotic journey into the high mountains of the title, which turn out not to be high mountains at all but mostly remote, grassy highlands dotted with large boulders. In 1904, Tomas is a young man in Lisbon who has been nearly paralyzed by grief by the deaths, in quick succession, of his lover, his son and his father. Angry with God, he begins walking backwards as a way of “objecting” to the sorrows life has dealt him.

One interest keeps Tomas going: He has found the journal of a 17th-century priest ministering to slaves in Portuguese Angola, who also struggled with the horrors he confronted in life. Tomas becomes obsessed with an unusual crucifix the priest describes having created and, having used the resources at the museum where he works, he believes that he may find it at one of a few churches in Portugal’s mountainous region. His wealthy uncle insists that Tomas travel there in the uncle’s automobile, one of the first in Portugal.

The journey is at times hilarious and at times heartbreaking. Tomas hasn’t a clue about how to drive, and he doesn’t have much common sense otherwise. The farther he gets from Lisbon, the more he and the car become the object of curiosity, fear and even violence. He has one mishap after another, to the detriment of his uncle’s once pristine automobile and of his own health and wellbeing.

Tomas’ increasingly fevered desire is to find the crucifix and use it to get revenge on God.  The end of this story is powerful.

Then Martel shifts to a completely different story, set on the edge of the high mountain region 35 years later. The most symbolic and fantastic part of the book, this novella takes place late one night at a hospital morgue, where a pathologist has, in succession, visits from two women who come to the office where he is spending lonely hours. The first, his wife, expounds, at great length, a theory she has developed in which she relates the mysteries of Agatha Christie to Christian theology. Both husband and wife are great fans of Christie, and the wife is a devout Catholic. If readers (or, as in my case, listeners) had not already been drawn into the book by the first section’s intriguing story, they might be tempted to give this part of the novel a pass. But, because the author is Martel, there is good reason to believe that the wife’s curious monologue is leading up to something else – and that belief is soon justified with the arrival of the second visitor. Before the night is over, the pathologist is dealing with the profound results of Tomas’ earlier journey and contemplating the reality of grief and sorrow.

The last section moves another half century forward, to the story of a senator in Canada who, grieving the death of his beloved wife, is moving aimlessly through his duties in Parliament and the rest of his empty existence. On a whim, he goes on a junket to Oklahoma, where he spends an idle day visiting a chimpanzee refuge. To his great surprise, he makes a connection with a particular ape. Determined to make a life with this one living creature that seems to depend upon him, he moves to the most remote place that comes to mind – the village in the high mountains of Portugal from which his parents had emigrated when he was a toddler. There, the two strange companions find a home. Martel relates their adventures in an engaging way, with both humor, symbolism and, yes, grief. All, however, is gentler than in either of the novel’s first two sections, as the three stories join in an apt conclusion.

Martel is dealing with Darwinism, with faith and religion, with, in a down-to-earth sort of way, the meaning of life. He also is telling a good story.

The High Mountains of Portugal, with its mix of humor, sorrow, action and contemplation, does well as an audio book. Mark Bramhall does an excellent job of reading it, easily moving across eras and continents.

This entry was posted in Audio Books, Contemporary literary fiction and tagged novels, The High Mountains of Portugal, Yann Martel. Bookmark the permalink.