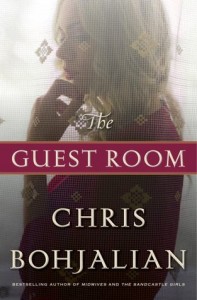 When I tried to tell a friend about the novel I was reading – a story about a man who offers his home for his younger brother’s bachelor party, only to find himself embroiled in a horror involving two murders, the Russian mob and human trafficking – she was surprised that I would read something so dark and unsettling.

“But,” I tried to explain, “he writes so well that the novel is a pleasure to read even though it is appalling. I just couldn’t stop reading.”

The “he” I was talking about is Chris Bohjalian, and the fact that I was talking at some length about his new book while engaged in what was supposed to be a relaxing walk is in itself a testament to his literary genius.

Bohjalian is a master at writing novels that seamlessly meld compelling, dramatic stories with disturbing reality, whether from the past – The Sandcastle Girls and the Armenian genocide – or the present/future – Close Your Eyes, Hold Hands and homeless children, teenage prostitution, a nuclear plant meltdown and mental illness.

His latest book, The Guest Room, describes how the picture-perfect life of one successful American man and his family turns into a nightmare because of one bad decision. Richard Chapman, a Wall Street investment banker, lives in a pricey Westchester home with his wife, Kristin, a teacher, and their bright, happy, pampered 9-year-old daughter, Melissa. His mistake is to let his irresponsible brother’s irresponsible friends throw the bachelor party at that home. Kristin and Melissa take refuge at Kristin’s mother’s apartment in Manhattan until they can return to their lovely home, which will by then have been tidied up, rid of any signs of the party.

But things go very wrong, and the Chapmans’ home will never again be the sanctuary it was. First, although Richard and Kristi had conceded that there probably would be a stripper, things fairly quickly went way beyond a thong-clad girl dancing. The apt term for the two girl performers emerged later in the book: sex slaves. They also were very young, possibly underage, not a lot older than Melissa. Far worse, though, one of these naked girls suddenly jumped onto one of the large Russian bodyguards who accompanied them, and killed him with a knife while Richard and the other men watched, frozen in fear and disbelief. Then there were gunshots, blood everywhere and two large Russian men dead in Richard’s house.

The girls, meanwhile, had fled in the SUV they had arrived in, even though neither really knew how to drive.

The rest of the book follows Richard and his family as they try to deal with what has happened, and the fallout. Kristin is at first mostly furious at the thought of what Richard might have done with one of the girls than. Later, after Richard is ordered to take a forced leave of absence from work, after the story is all over the news, after her students and, worse, Melissa, start asking questions, Kristin begins to realize how profoundly their lives have been changed. Richard is struggling with guilt, with the possible loss of his job, with legal and financial repercussions and, to his surprise, with worry about the girl he was with for a few haunting minutes upstairs in the guest room of his home.

That girl, Alexandra, meanwhile, is terrified, trying to avoid both American “police guys” and Russian mobsters. She’s afraid of jail, but the most likely alternative seems to be death. Her companion, the one who wielded the knife, vanishes and is soon found, murdered.

The book becomes a suspense story, a crime thriller of sorts, as, with Richard, we begin to realize the danger he and his family may be in. It’s also a story of family and marriage, as Kristin struggles to find forgiveness in her heart, and Melissa becomes angry with her father for his betrayal and his destruction of her safe world. And, ultimately, it’s a story about how the terrible and sordid things in the world really aren’t all that far away from even the most seemingly insulated of people.

The dangers seem even greater for Alexandra, trying to stay alive but unnoticed in New York. The parts of the book about her are the only ones told in first person, and we learn, heartbreakingly, the story of how she was lured into the sex trade as an orphaned child, and how she eventually turned up as a high-price hooker in the United States.

Bohjalian, as usual, has done his research well, and the story he has to tell is, indeed, disturbing –as it should be. But, as usual, he also writes well, creates sympathetic and believable characters, and leaves the reader thinking. Just what he accomplishes as he subtly weaves in the ideas of young Alexandra, even younger Melissa, and the Barbie dolls they both have owned makes for powerful literature.