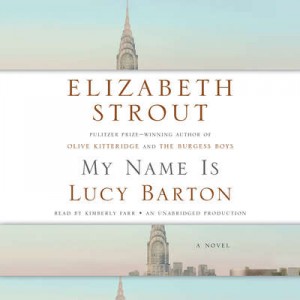 Elizabeth Strout’s books are so different from anything else I read, indeed, from most of today’s fiction as far as I can tell, that it usually requires a brief mental adjustment for me to get into one of her novels. With My Name Is Lucy Barton, as with the two of her books I’ve read before – the Pulitzer Prize-winning Olive Kitteridge and The Burgess Boys – the adjustment is worth the effort.

Indeed, the effort is minimal, because Strout’s writing is so good that I want to learn more of the story even if, at the beginning, it strikes me as a bit … well, slow.

Or maybe understated is a better descriptive. There is, on the surface, not a lot of action in this brief novel. Most of it takes place as conversation or sometimes just thought in a hospital room.

Lucy Barton is recalling a time several years earlier when she developed complications after what should have been a routine surgery and had to spend many weeks in a New York hospital, away from her husband and two young daughters. At the heart of the novel are the few days when her mother came from their hometown of Amgash, Ill., to stay at Lucy’s bedside. Lucy’s husband had summoned his mother-in-law and paid for her travel, even though she clearly did not like him, and even though she had Lucy had not spoken for years.

The story unfolds quietly and guardedly, as befits a hospital room in which one person is seriously and mysteriously ill, with medical professionals frequently in and out. The family’s story often is hidden amid the mother’s tart reminiscences and gossip about neighbors and acquaintances, much as the truth of the family’s existence had been obscured by the struggles of daily life. These two women find it difficult to talk to each other without exposing old hurts. And Lucy, who is beginning to make her way as a writer, considers everything carefully, aware that memory has its limitations.

Oh so gradually, we begin to learn why Lucy and her mother have been estranged. We also learn much more about Lucy’s childhood, until eventually we see that Lucy came from a family for whom the overused term “dysfunctional” might have been coined. The details, as they slowly emerge, often more in Lucy’s memories than in what is spoken aloud by either woman, are dramatic and distressing enough for several stories. We see how far Lucy has come, how much she has struggled, to be living with her successful husband and children in New York City.

And yet, Lucy hungers for closeness with her mother – “Mommy,” she repeatedly calls her, even though Lucy is grown and a mother herself – and, despite her prickly reserve, her mother also clearly cares for this child of hers, as much as she can.

As she reveals more about Lucy and Lucy’s mother, Strout reminds us that people are much more complex than they might seem, and that the bonds of family are strong even when they are sorely strained. Lucy loves her own daughters passionately and yet, we eventually learn, she is not willing to sacrifice her essential self for their happiness.

In the end, this brief novel is quietly triumphant, the story of a woman who struggles against great odds to find and protect her own self.

This novel, told so much through conversation and introspection, is particularly well-suited to being savored as an audio book, and Kimberly Farr does a fine job with the Midwestern accents and distinctive personalities.