A fresh perspective: The exotic and the universal 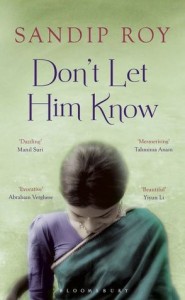 While the shell of Sandip Roy’s novel Don’t Let Him Know may tackle issues such as the silent taboo of homosexuality in Indian society or the conflicts faced by Indian expatriates in the U.S, the book explores far more deeply the intricacies of a human psyche. It effectively captures a familiar and universally relatable internal struggle across several generations through its strong character development. With each chapter originally written as a standalone short story, Roy’s debut novel powerfully ties together through the hauntingly simple story of a Bengali-Indian family. As each chapter could be read as a story on its own, the reader is left overwhelmed and connected with the characters at every chapter’s end.

One day, a widowed Indian woman, Romola Mitra, visiting her son Amit and his American family in San Francisco, is confronted by him about an old letter he found in a forgotten address book. Amit mistakes the letter to be from his mother’s long-lost lover, though it was originally addressed to his late father, Avinash, a closeted gay man. The story starts with this secret, as Romola struggles with the sudden rehashing of her husband’s quiet truth. However, right from the beginning, the beauty of the book is defined not by the social issue, but by the details through which Romola examines her sense of self. The book opens with a powerful picture of an elderly woman desperately trying to retain her dignity without burdening her expatriated son, as he attempts to reconnect with his mother over this forgotten letter. Her resolute conviction to feel alive outside her comfort zone in Calcutta speaks to the entire story: a series of moments in a family’s life expressing violent internal struggles through generic, everyday images.

The story progresses gently, constantly switching among characters and periods in the Mitra family’s life, be it from Romola’s childhood, to Amit’s earliest memories of his great-grandmother, or Avinash’s cognizance of his duty to be a respected Indian man and son. The book also jumps from Calcutta to San Francisco, and Roy remarkably captures the essence of both places, honoring the quintessential identity conflict for an Indian living in either, or both places.

Though the plot moves slowly, Roy lets his readers sink into a world of fabulous details. Without letting the central conflicts of sexuality and family dynamics overpower the story, he fleshes out his characters deeply, highlighting their guilt, sadness and tenderness to which every reader can relate. By examining enduring dissatisfaction and unhappiness, Roy brings forth the struggles of being human with a recognizable clarity. Roy takes us from Amit as a 9-year-old, feeling piercingly guilty over losing his watch, to a newly wed Romola quietly worried about married life as she assures herself that “desire will come,” to a teenage Avinash refusing to confront his earliest dreams about other men. Through it all, Roy’s skillful ability to delve into the innermost nuances of fear and love make his book extraordinary.

While audiences of all backgrounds can appreciate this book, its subtle, though powerful, images may be most touching to a reader familiar with Indian society. Roy’s descriptions of fluffy cotton sarees, the tanginess of mango pickle, and the hot aromas of the Indian city accurately construct the striking color of Calcutta during the summer season. The reader who knows Indian culture will particularly enjoy everyday, overlooked objects depicted in an elegant yet heartbreaking manner. The unyielding importance of social image and familial duty in Indian society also drives the novel, and it will be best understood by the reader familiar with these subtleties.

This book, though poised to discuss prevalent social issues in Indian culture, is not a dramatic story with a conventional narrative. It is an examination of the deepest, most unaddressed struggles of an ordinary individual from an ordinary family. The book effectively depicts our deepest conflicts with our own willpower and desires, amid societal pressures that leave us in a quiet desperation to affirm own happiness.