Here’s another of our interesting and well-done reviews by students in the opinion-writing class at the University of North Carolina’s School of Media and Journalism. 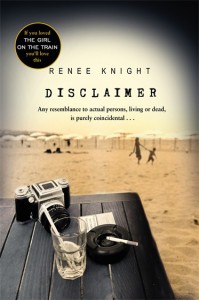 Starting a story by introducing a book-within-a-book — and having it be central to the plot— is a bold meta gambit, especially for one’s debut novel.

Disclaimer, written by British documentarian and screenwriter Renee Knight, begins with Catherine Ravenscroft nauseously distraught from reading The Perfect Stranger, a book mysteriously left on her bedside nightstand. What could make her so violently ill? A secret she held for two decades, believing it died with the only other person who knew it.

Much as in 2014’s acclaimed psychological horror movie The Babadook, a mysterious book can be a surprisingly effective conduit of terror. The Perfect Stranger has its disclaimer — boilerplate language that the story does not resemble any person living or dead — crossed out by the author-cum-antagonist who also ensures the book finds its way into the hands of Catherine’s loved ones. The Perfect Stranger’s end also portends a gruesome death for Catherine, which naturally terrifies her.

It’s not meant only to terrorize Catherine, but also to force her secret onto her husband, Richard, and son, Nick, in the hope that it ensures its vengeful author’s vindication.

The author of The Perfect Stranger is Stephen Brigstocke, an elderly schoolteacher who was despised by students and forced into retirement under questionable circumstances. He tells his story in the first person, contrasting with the third-person narrator who follows Catherine and her family, as he plans to ruin her family and kill her. He dons his wife’s old cardigan — which he grows increasingly attached to — and calls himself a widower. But years earlier, Nancy Brigstocke had begun telling people Stephen was dead. Catherine may be the protagonist, but it’s through Stephen that readers uncover her past.

The Perfect Stranger in many ways is a manifestation of Stephen Brigstocke’s obsession with Catherine and what she’s held that affects his family more than 20 years thereafter. Stephen has the manuscript printed and sent to Catherine, and then awaits her response — while also manipulating her family against her.

Disclaimer has drawn comparisons to Gone Girl, and it’s understandable why.  The central conflict is domestic, as the wife and husband cannot come to terms with their actions and therefore have kept the secrets that have plagued their marriage for years. It’s hard for the reader to trust anyone —Stephen Brigstocke, obsessions and all, is the most sympathetic character for large parts of the novel — and yet the reader stays captivated by the sinuous nature of the characters’ circumstances.

The wordplay, with its colorful metaphors that too often border on camp, prevents this story from likely finding an audience beyond fans of the thriller genre. It never quite reaches as high as its premise allows. It is a deconstruction of the genre that merely settles for being an entertaining dispute between two intertwined families searching for the truth.

But the flaws of Disclaimer don’t distract the reader for the most part,  cropping up only to distract and annoy for a page or two at a time. Alternating between the narrative perspectives of Stephen Brigstocke and the Ravenscrofts — as well as excerpts from The Perfect Stranger — keeps the story engrossing despite its tics.

This entry was posted in Popular fiction, Thriller/Suspense and tagged Disclaimer, Renee Knight, thriller, UNC School of Media and Journalism. Bookmark the permalink.