A fresh perspective: Not just formula 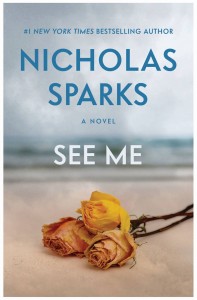 An unlikely couple looks out across the Atlantic, letting their thoughts drift gently with the tide; all is well.  As the waves begin crashing, however, the couple is consumed by a wave of fear.

The early plot of See Me is similar to that of most Nicholas Sparks novels; the first few chapters slowly introduce Maria and Colin, the main characters who inevitably fall in love.  However, Sparks’ first romantic thriller brings more intensity and action to the table than one might expect. After Maria and Colin’s relationship develops, several external conflicts emerge. The rising action spans the majority of the novel as a terrifying mystery builds.

Maria and Colin meet under unlucky circumstances: Colin is covered in blood, bruises, and tattoos – the image of a typical bad boy. Maria is not only uninterested, but also afraid. With the help of Serena, Maria’s fun-loving sister, the two meet again at a local bar. As he opens up to her, Maria learns that Colin boxes as a way to cope with his anger and PTSD – he was severely bullied throughout military school.  On the other hand, Maria has degrees from the University of North Carolina and Duke and a job at a successful law firm. Anonymous notes, flowers and unwanted attention from a married co-worker raise red flags for Maria.  Signs of stalking and a story from Maria’s past resurface, ending in flames.

See Me reads like a screenplay at times; some of the action-packed chapters seem more like stage directions than action within the plot. However, this technique allows the reader to visualize the quick-paced drama as the couple searches for the perpetrator.

Sparks smartly creates unnatural and uncomfortable language, tones and sentence structures to mimic the panic or fear arising within each character or to hint that something out of the ordinary and crucial to the plot is occurring. The contrived nature of the latter chapters subtly hints at the story-long manipulation controlled by the secret antagonist.

See Me speaks to contemporary issues that are often difficult to understand and of which many are afraid to speak. Sparks tastefully shows the reality of mental illness, sexual harassment, suicide, anxiety, etc. Incorporating these issues makes this novel more relatable and representative of the real world. Maria suffers from anxiety and frequently experiences panic attacks; Colin suffers from PTSD and anger management. That ultimately these problems do not determine the success of each character rings true for many and sings an inspiring message.

As trite as it sounds, See Me is a “page turner” that cleverly takes the reader through a full range of emotions – from excitement to terror.  It allows the reader to experience heart-racing drama through Maria and Colin’s relationship. See Me defies the typical Nicholas Sparks formula and is sure to entertain a wider variety of readers.

This entry was posted in Popular fiction and tagged Nicholas Sparks, See Me, UNC School of Media and Journalism. Bookmark the permalink.