Here’s another review by a student in the opinion writing class at UNC Chapel Hill’s School of Media and Journalism. 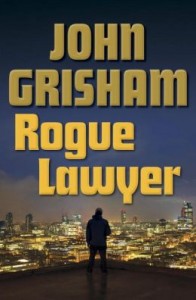 Rudd enjoys the challenge of defending clients who seem impossible to defend. Some simply have a bad reputation. Others have mountains of evidence against them.

Rogue Lawyer is an episodic book, using a collection of stories to create a cohesive narrative about Rudd’s life. Most of these stories revolve around Rudd’s court cases. In addition to these cases, Grisham gradually weaves Rudd’s personal life into the book’s stories.

By the conclusion, that personal life and the cases have become so closely knit that Rudd is unable to separate the two. Some of the characters Rudd defends begin to impact his family life in extreme ways, and the interaction nearly becomes too much for him to handle.

Rudd’s personality plays a major role. His desire to take on seemingly impossible cases shows not only his determination, but also his brazenness and arrogance.

Yet Grisham works these qualities to make Rudd an endearing character. He portrays justice as the source of his rogue lawyer’s bold personality, something to which readers will relate.

Rudd also has tender moments with his young son, Starcher. This relationship, combined with the hysterics of his ex-wife, make Rudd a character to root for throughout the book.

Rudd’s character also receives a boost as Grisham delves into the book’s secondary characters, primarily his clients. One in particular, Doug Renfro, is an elderly man who feels he was wronged by the justice system. Rudd rushes to his defense, leading to several touching moments between the two.

Rudd goes to great lengths to protect his clients and serve them as well as he can, at nearly any cost. Extortion, intimidating potential witnesses – these are fair game for him.

However, not all of Rudd’s clients are misunderstood. Several turn out to be exactly whom the law believes them to be, but even these characters are entertaining, although rooting for them may be difficult.

The biggest problem with this book is that it takes too long to see Rudd’s complex personality and his relationships with his diverse clientele. The first case in the book is rather forgettable. Rudd talks about himself far too often, and his client is the weakest of the cast of characters Grisham introduces in the book.

However, that first case sets the stage for the remainder of the book’s events, particularly the personal aspects of Rudd’s life that become so important in the later cases.

It is Grisham’s interweaving of Rudd’s personal life and work that makes this book compelling. The number of storylines keeps the book fresh without becoming cluttered.

The toll that these complex interactions take on Rudd’s life is evident, and it causes the reader to be invested in his well being while still caring about the well being of his clients.

Even though it takes time to develop these storylines, the resulting product makes Rogue Lawyer a fun, fast-paced novel that readers will find hard to put down.