Paul O’Connor takes a break from his readings of history to review a book about something that, unfortunately, is as contemporary as it is terrible: life in North Korea. 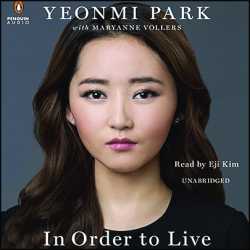 Readers of Frank McCourt’s fabulous 1996 memoir, Angela’s Ashes, were astonished by the deprivations that the Irish-American author endured in his earliest years. Yeonmi Park’s In Order To Live reminds us that McCourt’s experiences were not unique to this world.

In this memoir, Park tells the almost not believable story of deprivation, terror, authoritarian control and naivete that constitutes life in North Korea.

Growing up in the northernmost region of North Korea, within sight, sound and smell of China, Park experienced hardship difficult for Westerners to imagine. For that matter, it was hardship unknown just a few miles away, across the Yalu River in China.

Food, clothing, heat, even love, were always scarce. Families survived on minuscule portions of rice, while wearing rags and shivering in the cold. In a land of arranged marriages, love was an emotion reserved for The Dear Leader in the capital of Pyongyang, not for a boy in one’s school.

But naivete was plentiful. Park and her neighbors had been brainwashed into believing the government’s depiction of North Korea as the world’s most prosperous country, even on days when the winds brought the aroma of luxurious food – food Park and her family would never find in their city – cooking just across the Yalu.

It is a story of a government in complete control, one that limited opportunity to all but the most privileged and which would take that privilege away from an extended family for any transgression committed by any member of that family. The government controlled all thought, all entertainment, all conversation, all love.

It isn’t giving away any great secret that Park escapes to the West. How, otherwise, would she have told her story? And that escape through China is as suspenseful and terrifying a tale as she tells in her chapters about North Korea. The final chapters, however, from the days she arrives in South Korea to early days of 2015 when she wrote this book, amount to a plot twist right out of Horatio Alger.

The audio production is superb. Eji Kim has a delicate, young and innocent voice, and her reading adds to the pathos. Her accent – she often mispronounces even common English words – only adds to our endearment for Park.

The beauty of Angela’s Ashes arose from the insights into life McCourt drew from his poverty. Much the same can be said of Park and what she, at such a young age, can explain to the rest of us.