The deepest mystery of all

Bob Moyer takes a look at a new stand-alone novel by the author of one of his favorite series, and he likes what he sees. 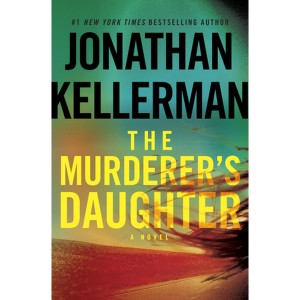 Early in this one-off, stand-alone book, the new kid, The Murderer’s Daughter, meets with Alex Delaware, the protagonist of 28 Kellerman novels. The meeting is not coincidental; she once took class with him, both are successful therapists, and both work for the University of Southern California. The meeting is also significant to the plot; he provides her with self-protection advice (get a gun) and the name of a martial arts trainer, information that will serve her well later in her adventures. The connection here, however, goes deeper than mere plot development.

Delaware fans have wound their way through myriad plots over the years, ranging from adequate to awesome. They come back not for car chases and carnage (Delaware drives an ancient Cadillac sedan) but for Delaware’s knowledge of the deepest mystery of all —human behavior. His intuitive dissection of the criminal mind, coupled with his innate empathy for the victims, makes him the master of the genre. The Murderer’s Daughter, Grace, manifests all those same qualities — in a brand new package!

And what a package it is. Orphaned at the age of 5 by the murder/suicide of her parents, passed through numerous foster homes, she survives by her sizable intellect until someone notices her precocity, and provides her the means to nurture her genius. By dint of her ability to understand what people need, and what she has experienced, she matures into a successful therapist specializing in rebuilding victims’ lives. She has a thriving practice, a hefty income, professional prestige — and a few lingering afflictions from her past. She lives alone, she sucks her thumb when she sleeps, and she has sex only (once) with men she picks up in L.A. bars. She balances her breathing and sex life quite adequately until one of those men — well, that’s a spoiler that should not be allowed to spoil the reader’s surprise.

Someone is after her, and what ensues is a fast-paced game of cat-and-deadly-mouse in which the tracked becomes the tracker.

Kellerman intersperses action with the story of her life. We see where she comes from, but the bad guys don’t see her coming. Both in her past and in the lethal present, she makes a series of intuitive deductions that in any other book would defy belief, but, as Kellerman points out, “First guesses are often right on, maybe because they spring from a deep, intelligent place in the unconscious.”

Hers are “freakishly acute,” because Kellerman is freakishly good. It all makes for some rip-roaring action that leaves the typical Delaware plot in the dust, like her Aston Martin DB7 would leave his Cadillac Seville behind.

It’s a raging good read that leaves at least one reader hoping for a return engagement.

This entry was posted in Mysteries, Thriller/Suspense and tagged Alex Delaware, crime fiction, Kellerman, The Murderer's Daughter. Bookmark the permalink.