Thank goodness Tom Dillon has wide-ranging tastes in books. He reads and reviews some fascinating ones we might otherwise overlook.

THE RICHEST MAN WHO EVER LIVED. By Greg Steinmetz. Simon and Schuster. 283 pages. $27.95 hardback. 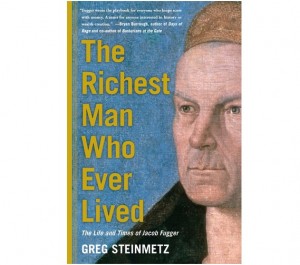 Augsburg in Bavaria, my home for much of the 1960s, is a middling-size German city about 70 miles north of the Alps. From parts of town, you can see the mountains on a clear day, shining white on the southern horizon. The city is blessed with wonderful churches, a long history – it was founded as a Roman outpost in approximately 15 B.C. – and great rivers flowing from the mountains; a slalom run off the glacier-fed Lech was the site of whitewater canoe-kayak events during the 1972 Munich Olympics.

Augsburg today plays second fiddle to Munich, its much larger neighbor, home of the famed Oktoberfest and gateway to almost all of the German alpine region. But it wasn’t always so. At the turn of the 16th century, Augsburg was a world power to rival Venice and Vienna. “Few cities matched the energy and excitement of Augsburg,” writes Greg Steinmetz in this illuminating book.

All that was primarily due to the enterprise and business savvy of a family named Fugger and in particular a son named Jacob, a textile merchant turned banker who may well have been, at least measured by the size of the economy in which he operated, “the richest man who ever lived.” Yes, there is some argument, and figuring out the answer is not an exact science. Fugger must be compared to such people as Nathan Rothschild, John D. Rockefeller and a Roman general named Marcus Licinius Crassus.

Still, consider a letter than Fugger wrote in 1523 to Charles V, the Holy Roman Emperor and indisputably the most powerful man in Europe. Calling in a debt, Fugger wrote, “It is well known that without me, your majesty might not have gained the imperial crown.” And this from a commoner who could well have been clapped in jail had the emperor not feared the consequences. Jacob Fugger, to say the least, had nerve.

Or consider the matter of Pope Leo X’s selling of indulgences, a way to let people supposedly buy their admission to heaven. This was one of the issues that so inflamed Martin Luther, leading to his famed 95 Theses and eventually to the Protestant Reformation. All that is known; what isn’t common knowledge is that the Pope resorted to selling indulgences in part because of the massive debts the church owed Jacob Fugger in connection with the appointment of a new archbishop of Mainz, Germany.

“The Reformation had many causes,” Steinmetz writes. “Vatican corruption, lustful priests and church meddling in secular affairs all fed the rebellion against the Catholic Church. But Fugger lit the fuse.” Luther “recognized indulgences for what they were,” writes Steinmetz, “a scam Rome invented to cash in on popular fears of damnation.” For the record, Luther covered the Pope’s sale of indulgences in Item 67 of the 95 he nailed to the door of the cathedral in Wittenberg.

“Most people become rich by spotting opportunities, pioneering new technologies, or besting opponents in negotiations,” writes Steinmetz, a longtime journalist who today works as a securities analyst for a money-management firm in New York. “Fugger did all that through a mix of gumption, chicanery and intellect.” But he had the extra quality of that nerve, and that made the difference. It’s not easy to stare down a head of state.

It is perhaps odd that so few Americans know the story of Jacob Fugger, whom Germans know as the “German Rockefeller,” or perhaps the German version of Lorenzo de Medici, financier of Renaissance Florence, Italy. Steinmetz was no different. He first heard Fugger’s name in freshman history at Colgate University, he says, but didn’t really appreciate the man until becoming a regular visitor to Germany. Indeed, the major sourcebook of information about Fugger has never been translated, he says.

But Fugger’s importance cannot be overstated. His career paralleled the rise of the both the banking industry and the Habsburg family, rulers of Austria-Hungary — and indeed of much of the Holy Roman Empire — through World War I. At his death in 1525, Fugger’s net worth was nearly 2 percent of the European economic output, or in today’s dollars a whopping $400 billion, Steinmetz has calculated.

Fugger’s success inevitably led to mistrust and scheming by others, and Steinmetz says he likely suffered from it. “He had few friends, only business associates,” Steinmetz writes. “His only child was illegitimate.” But Fugger succeeded on his own terms, and is indeed the only businessman in Walhalla, a kind of German hall of fame in the Bavarian city of Regensburg.

And in a final irony, he’s probably best remembered, at least in Augsburg, for the creation of the Fuggerei, a home for the working poor and elderly that still survives – and is still supported by Fugger family money – after all these 500 years. The settlement was badly damaged by an American air raid on Feb. 24, 1944, but it was rebuilt by family members using materials from American occupying forces. The settlement looks today much as it probably did in Fugger’s day.

So what’s Fugger’s legacy? Is it the Fuggerei and his support of the poor? Or is it the business acumen of a man who “wrote the playbook for everyone who keeps score with money,” in the words of Bryan Burrough, co-author of Barbarians at the Gate? You’ll have to develop your own answers to those questions, but you’ll learn a lot of history in doing so. And you will, perhaps, have a little better insight into both Renaissance Germany and the origins of modern banking.

This entry was posted in Biography, History and tagged Biography, Jacob Fugger, Steinmetz, The Richest Man Who Ever Lived. Bookmark the permalink.