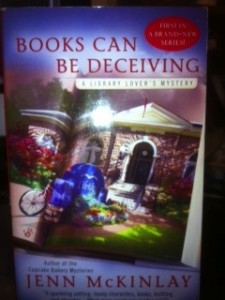 Sometimes, you just need a light, cozy mystery to entertain you. For a lover of books, if that mystery has a library as a major setting and librarians as protagonists, then it’s even more of a treat.

Jenn McKinlay’s Books Can Be Deceiving, first published in 2011, is the first in her “Library Lover’s Mystery” series that now includes several more books. McKinlay, had already gained many fans for her “Cupcake Bakery Mysteries” and “Hat Shop Mysteries.”

As an audio book, this one is a quick, fun listen. The characters are engaging, headlined by Lindsey Norris, who has recently taken on the job of head librarian at the public library in the small seaside town of Briar Creek, Conn. Lindsey and her friend Beth, the children’s librarian, have good ideas for making the library an important part of the community.  They are surrounded by small-town characters who are suitably eccentric or endearing, and, in at least one case, a possible romantic interest for Lindsey.

The setting, on Long Island Sound with the many small Thumb Islands (read: Thimble Islands) just off shore, is fascinating.

Lindsey’s co-worker and friend Beth has been in a relationship with an enigmatic but successful children’s book author for about five years. He’s not particularly nice to Beth, and he makes it clear that he’s not interested in marriage. Beth lets him string her along, but they have a very public break-up one night when they fight over a children’s book that Beth has written. Beth’s friends want her to show her manuscript to a New York editor who’s vacationing in town, but the boyfriend, Rick, is adamantly opposed.

The next morning, Lindsey and Beth meet with the editor, only to discover the source of Rick’s opposition. They get a boat to take them to the private island where he lives so that Beth can confront him. Instead, they find him murdered, and Beth quickly becomes the No. 1 suspect.

Of course, since this is a cozy mystery, Lindsey and Beth set out to find the real killer. Their quest takes them into some interesting situations, not to mention danger that results in another body or two and threatens our heroines.

This is not, by any means, a deep, psychological literary mystery, but it never pretends to be. This is a fast-paced, sometimes humorous, sometimes romantic, light-hearted tale. Allyson Ryan reads it capably, keeping the story moving.

The mystery seems a little thin at first, but McKinlay manages to throw in a surprising twist. A few characters, particularly the chief of police, are little more than stereotypes.

Listening to the book may require a bit of suspension of disbelief in aid of the story. Even though our heroines are librarians, they don’t seem to be able to find out much about Rick’s background, for example, and a few details are a bit hard to believe. But it’s all in fun, after all, and any distractions aren’t enough to keep the story from being entertaining, if you’re in the right frame of mind.