Paul O’Connor somehow missed this excellent Civil War history when it was published a few years ago, and he’s glad he found it now as an audio book. 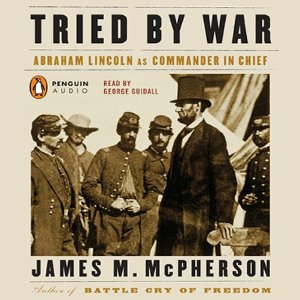 Eminent British war historian John Keegan once designated four military leaders as history’s most innovative. In what many in the U.S. South probably found unsettling, Keegan put U.S. Grant along with the likes of Alexander the Great, etc.

But had Keegan been able to read James McPherson’s “Tried by War” before writing, he might have chosen President Abraham Lincoln in Grant’s place.

In this 2007 book, McPherson tracked the role that Lincoln played in formulating Union strategy and tactics, taking the story well beyond the typical story Civil War readers hear: “Lincoln urged his generals to attack, but they sat on their hands. Then he found Grant. War over.”

Lincoln had what must have been one of history’s most-aggravating relationships with his generals. They wouldn’t attack. They wouldn’t move. They insisted on an overwhelming advantage in forces before attacking and consistently overestimated rebel strength. When they defeated a rebel army, they rarely followed up with efforts to destroy it.

And it wasn’t just Gen. George McClellan who refused to move; the problem permeated the Union leadership.

Lincoln understood a number of key concepts for fighting in the mid-19th century. One was that an army must move quickly, but huge supply wagons would slow it down. Therefore, armies should carry less with them.

Another was that an army with the logistical advantages of the Union, facing an opponent with the interior lines of defense enjoyed by the rebels, must make coordinated attacks on numerous fronts.

From the earliest days of the war, Lincoln urged his armies to coordinate their attacks so that rebel generals could not shift defensive armies from one front to the other and support each other. His generals refused to work together, until, that is, Grant got Philip Henry Sheridan and William Tecumseh Sherman all on the same page.

Lincoln also understood that he would not suppress the rebellion by taking geography. He had to destroy the rebellious armies, but his generals were transfixed on capturing Richmond and other key cities when they should have been destroying their enemy.

Lincoln faced a political situation that no American commander-in-chief before, or since, or we should hope ever again in the future will face. He could not count on the political loyalty of his generals. Not only did a good number of American generals desert the Army to return to their home states, but also many of his Northern generals were Democrats and their loyalty to him, and to his demands that the Union be preserved, could not be assumed.

Through it all, Lincoln was a genius who understood how to win. He just had to find the generals who knew how to carry out orders.

McPherson has written a spectacular book in Tried by War. That should be expected, considering that his Battle Cry of Freedom is one of the best one-volume Civil War histories ever compiled.

George Guidall reads this well, but does so quite slowly. I adjusted my app to listen at 1.25x and 1.5x speed, and it sounded more natural.