Paul O’Connor has been reading and thinking about spies this summer, and he’s developed high standards. 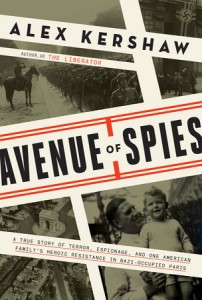 When Germany declared war on the U.S. in December 1941, Dr. Sumner Jackson had every reason to believe that he’d be arrested. The Maine native and World War I American Army veteran ran the American Hospital in Paris and, therefore, was an enemy national so far as the German occupying forces were concerned.

Additionally, he lived at 11 Avenue de Foch, an address just a few doors down from residences requisitioned by the Gestapo and Vichy France collaborators. In short, Jackson was living and working right under the noses of what were supposed to be some of the world’s most efficient secret police.

Could there have been a better location from which to operate a spy network, including a drop site for agents and a safe house for downed Allied fliers being smuggled back to England, than this doctor’s home and office?

Alex Kershaw’s Avenue of Spies is the story of Jackson, his wife and teenage son as they helped the Allied cause. The author sets this story in the context of the wider Gestapo and SS operations in the city, catching Allied spies, rolling up the French resistance and deporting Jews to the death camps.

Given all that material, it is remarkable that this book is not more exciting and suspenseful, that at few times does it make us want to read just one more chapter before turning the lights out. It’s not that it’s dull; it’s just that it is rarely compelling. On only one occasion, for example, do we really get a good sense of the American flier being smuggled back to England. On only a few occasions do we sense the danger involved in any one information drop at Jackson’s office.

(A caveat here: I listened to this book immediately after reading the spectacular Billion Dollar Spy by David E. Hoffman. So, my expectations may have been too high.)

The story is most valuable in its detailed account of Nazi operations in Paris, and the efficiency with which SS leader Theodor Dannecker and SS officer Helmut Knochen rounded up French Jews and infiltrated the resistance. While a great deal has been written recently about Allied intelligence victories during the European occupation, this book provides the other side, that in which the Germans have their victories and frustrate Allied spy and resistance networks.

But the very efficiency and skill the Germans demonstrated in other pursuits only makes their ignorance of what was happening in the home of the Jacksons, just a few doors away, that much more incomprehensible. And, I should say, makes the courage demonstrated by the family ever more noteworthy.