Afloat with love and literature 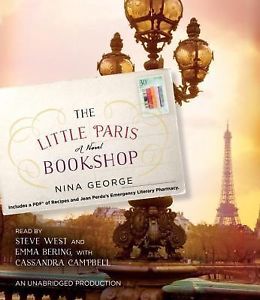 Monsieur Perdu runs a floating bookshop, on a barge moored in the Seine in Paris. But he’s more than just a seller of books: Perdu is a literary apothecary. He has the gift of figuring out what’s troubling his patrons, and then prescribing the novels that will help them. Good fiction, he believes, can solve many of life’s problems, or at least make hardships more bearable.

Unfortunately, Perdu cannot heal himself. He has been barely going through the motions in a bleak existence for more than 20 years, since the love of his life abandoned him. She sent him a letter, but he chose not to open it.

Then circumstances – including a new woman, Catherine, moving into his apartment building – prompt him to read the letter from his beloved Manon at last, and what he finds sends him off on a spur-of-the-moment journey. He’s determined to face up at last to what really happened, all of it. He hopes to find some semblance of peace, and perhaps forgiveness.

With no preparation, without provisions or even cash, Perdu unties the barge and sets off on a journey across a network of rivers and canals, heading for the south of France. He’s joined by a young bestselling author who hopes to dodge his fans and shed whatever has been preventing him from writing his second book. Before long, an itinerant Italian chef who’s also lost the love of his life joins the unlikely crew. All three find much of value on their quest.

And they take the reader along on their improbable journey, having adventures and meeting people along the way. For those of us who can’t take a boat tour of France’s rivers and canals, this is the next best thing – with lots of literary references as a bonus.

It’s no wonder this book, recently translated from the original German, was on bestseller lists in Europe for many months. It’s a highly original and thoroughly captivating story, sure to appeal to those who love books and the power of literature in our lives. There’s a bit of magic here, requiring a little willing suspension of disbelief. There’s also much truth about life, love and the possibility of finding healing and redemption.

Steve West and Emma Bering, with help from Cassandra Campbell, bring it all to life in the audio version. They use just enough French accents and the occasional word or phrase to transport the listener/reader to the charming settings. As I can’t do French accents in my head when reading printed books, I found this novel particularly well suited to audio.