Israel, the U.S. and one man’s journey

If Paul O’Connor indulges in light books for summer reading, he keeps it a secret. Here he tackles a hefty book on a serious – and timely – subject. 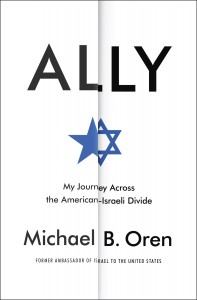 During a visit to an American college campus, Michael Oren, then the Israeli ambassador to the United States, faced a surprise question, one different from the usual collection of either pro-Israel softballs or anti-Israel screeds.

Which is more difficult, the student asked Oren, who served as ambassador from 2009 to 2013, explaining Israel to Americans or America to Israelis?

Although he relates the anecdote in Ally to begin a chapter on the Arab Spring, he could have used it to open the book, because this memoir is Oren’s attempt to explain the current Israeli government’s strategic and political positions to both American and Israeli readers.

He’s consistent. Whether on the questions of Israeli settlements, or pre-1967 borders, or incursions into Gaza, or dealings with Iran, Oren details how the Israeli position was correct and the American – or read, the Obama administration’s – was flawed. It’s almost as if one were listening to Fox News.

But who would expect anything different?

It’s obvious that a former Israeli ambassador will write from his perspective – that Israel was making all the effort at peace, the Palestinians were refusing to participate, and the Americans were misguided in not seeing that simple truth.

Therefore, approach this book forewarned. And once forewarned be prepared for what is a deep discussion of the issues in the Middle East and a good story about a young man born in New Jersey, educated at Columbia and Princeton, who emigrated to Israel, and eventually surrendered his American citizenship but not his love for American football.

There’s much to be learned about Middle East affairs, and Israel’s positions, from this book. Israel, for example, is highly sensitive about the notion that it exists as a remedy to the Holocaust. It is important Israeli doctrine that the country exists because of a 3,000-year-plus presence on that piece of land, not as a reward of damages after the pogrom. Also, the reader will get a deeper insight into the Israeli position on the Palestinian Authority’s threats to have Palestine declared a formal political state.

And it is not only the Palestinian perspective that is neglected. So is the American perspective. Oren only rarely concedes that the U.S. has interests of its own and that it cannot always concern itself first with what is best for Israel.

Oren never stops speaking of his love for the United States, but he also rarely gives the administration credit for doing anything right.

There is another story, here, however, one more personal. It is the memoir of a man who overcame obstacles – severe learning disabilities and anti-Semitism – while in his teen years to accomplish his life’s dream, becoming Israeli ambassador to the U.S. He is also an accomplished historian and an excellent writer.

Stories of life in Israel, in the Israeli military and in the diplomatic corps are also engaging.

Although Oren told the college student who posed the insightful question that it was more difficult to explain America to Israelis, doing so could hardly be the purpose of this book. Instead, Ally reads mostly as an explanation of the Israeli argument to Americans and secondly as Oren’s presentation of himself to Israeli readers. He is now a member of the Knesset.

In the audio version, Oren does a credible job of reading his own work, with one annoying exception. He doesn’t settle on a pronunciation for the name of Benjamin Netanyahu. Is it “net TAHN yahoo” or “net TAHN yow”?

That aside, this is a very current book considering the agreement on the Iranian nuclear program – at least current from the Israeli perspective.