Tough going in the Big Easy

It’s always a happy occasion when Bob Moyer returns from one of his journeys ready to tell us about the books he’s been reading. 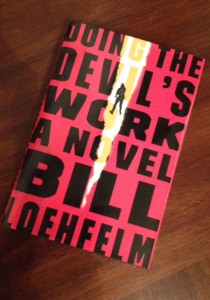 In his excellent police procedural series set in New Orleans, Bill Loehfelm pours into his narrative all he has soaked up while living there. He has a sharp eye, and sharper pen, for all the detail that makes New Orleans — well, New Orleans. From dicey uptown neighborhoods, hear “…the whine of an ambulance headed down Napoleon Avenue, the imitative howl of a dog in a nearby yard, the long, deep note from a ship on the river.”  Down on Frenchmen Street, “the dusky crown of an oddball neighborhood called the Marign. … Fedora-topped hipster poets smoking hand-rolled cigarettes perched typewriters on folding cocktail tables, scratching their beards and tapping out poetry on demand, hoping for enough in cash donations to cover their next round.”  With a splash of sound here, a splatter of color there, he does New Orleans as well as anyone writing today.

He doesn’t just know New Orleans, however; he knows how to use it. In his hands, the Crescent City becomes more than a setting. It becomes a major character that carries on a vibrant relationship with his cast of players, bringing out their best and worst, their hopes and dreams, and of course, their darkest secrets.

Sometimes, the dialogue helps the reader size up someone, like his hero, Maureen Coughlin. When she stops for a moment on a call, she calculates her chances in relation to “…the fifty people, most of them men, drunk, high, some them armed, between her and the corner. She was a cop … but she was also five-four and 120 pounds. Outnumbered and outgunned.”  When she stops at a local diner, the St. Charles Tavern that “…smelled of old kitchen grease, moldy air-conditioning, and cheap ketchup,” we get more than just atmosphere, we get an insight into Maureen herself:  The Tavern “…served their coffee the way she liked it, old and burned. Or as she liked to tell her coworkers, hot, black and bitter like her heart.”

A displaced Yankee, Maureen has a tough time adapting to the corrupt cop culture of the sleazy Big Easy post-Katrina. Quick to anger, slow to catch on, she finds herself constantly in situations she can’t talk about, and conversations she can’t tell anyone about. Loehfelm’s dialogue has the tension of real cops talking, not characters served up to act out a story. For Maureen, there’s no black and white, just hundreds of shades of gray.

In this third installment, she’s still tracking the murderer from the second book when she stumbles into a complicated plot that carries her from street people to uptown posh parties to a Mississippi militia. She gets so caught up that both a criminal and a possible informant accuse her of Doing The Devil’s Work. Although she has a strong moral compass, some of her other parts need repair. By the time she ends up waist deep in the Mississippi, she has sunk even deeper into the corruption of the local culture. Perhaps Loehfelm will let her take the detective’s test so she can pull herself out of the muck in the next installment.