Who will be the next prey? 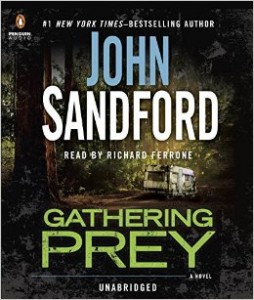 When a novelist has a long-running successful series, as John Sandford certainly does with his ‘Prey” thrillers starring Lucas Davenport, fans know what to expect. Some books will please various fans more than others. I’m not sure “enjoyed” is the right word for my experience with this one, but I certainly was caught up in the audio version of it, to the point of taking the long way home when I was at one of the many suspenseful passages.

“Gathering Prey,” the 25th book in the series, offers much of what readers have come to expect from Sandford. We’re back in Minnesota, at least for a while, where Lucas works for the state Bureau of Criminal Apprehension out of the St. Paul office.

Lucas is an intelligent, thoughtful person who works because he mostly enjoys the challenges and thinks he’s doing something worthwhile at least some of the time, not because he needs the money, which he definitely does not. He’s also a family man, with a wife who’s a surgeon, a couple of young children and an adopted daughter, Letty, who’s had a mind of her own and a stubborn streak even before she got old enough to head off to college at Stanford.

It’s in California, where Letty is about to wind up her freshman year, that the action starts. She befriends a couple of “Travelers” –young people who roam the country with their belongings in backpacks, hitching rides here and there, working long enough to earn money to buy food and get to the next place, maybe smoking a little marijuana but not doing anything really bad. Letty gives the girl, Skye, her contact information, but she’s surprised when she does hear from her after she’s back home in Minnesota. Skye is in South Dakota, alone and frightened; the gentle young man she traveled with has disappeared, and she’s been told he was murdered in a particularly gruesome way by a group led by a man called Pilate, a man she already had thought of as the devil.

Letty helps Skye get to the Twin Cities, and Lucas volunteers to go along when she meets with her, partly because he suspects Skye is taking advantage of his daughter’s generosity. He’s heard these sorts of stories before.

The more they hear, however, the more Lucas begins to believe that there’s truth in Skye’s story. When he, and at first, Letty, try to find out what happened to her companion, they gain insight into the terrible world of Pilate and his followers. These people roam the country, often crossing paths with Travelers and often showing up at gatherings of Juggalos, fans of the band Insane Clown Posse, who gather for festivals at various locations.

Pilate’s group, however, is into more serious drugs, crime and abuse of women than are the gentler souls they mingle with – including murder for the thrill of it. Think Manson family, only several times worse. Lucas’s quest takes him from Minnesota into Wisconsin and the Upper Peninsula of Michigan.

That quest also gives rise to some elements of this book that might not please some long-time fans. Sandford never minces words about the crimes Lucas is investigating, and Lucas has certainly dealt with some horrific events before, but there’s a lot of violence in this story, and some of it is difficult to read about or listen to.  And the need to track the group as it moves from state to state means that Lucas doesn’t have as much time as he sometimes does to get to know the local people and authorities he’s dealing with.

I thought the book was good, gripping, worth reading to the end. Besides as much action and suspense as anyone could want, it offers insights into a part of American life most of us are only vaguely aware of, if at all. This 25th novel also marks the emergence of Letty as a more important character, which promises interesting stories to come. And it moves Lucas to a watershed moment in his career. Stay tuned.

Richard Ferrone does a fine, Lucas-worthy, matter-of-fact job of reading the story, which needs no embellishment.