Paul O’Connor has tackled an exhaustive (and exhausting?)  but worthwhile new biography of Ronald Reagan. 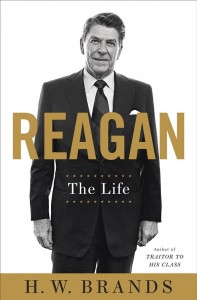 My mother really liked Ronald Reagan. She considered him handsome, charming, witty and clever, and she even liked a few of his movies and TV shows.

But, to the best of my knowledge, she never voted for him.

With Reagan seen as the patron saint of an increasingly radical Republican Party and his name being raised in political arguments even by Democrats, H.W. Brands’ new, comprehensive and straightforward biography could help the American public understand the several sides of the late president.

If only they’d read or listen to it.

The biography, like most, is a monster, 737 pages or 32 hours, and even Stephen Hoye’s excellent audio book narration doesn’t relieve one from the sense that “I’ve been at this forever.” And today’s readers, who often choose the news medium that reflects their own ideologies, might be disappointed that Brands does not interject himself, providing a factual narration until the very end. And even then, he finds both success and failure, good and bad, in Reagan.

To my view, this is an important book today because it substantiates what the non-compromising Tea Party politicians overlook about their saint: Reagan was a practical politician. He compromised often, regularly saying he’d take an 80 percent victory and later try to get the 20 percent he bargained away.

He may be considered the father or uncle of modern American conservatism, but his record, if shown without his name attached, would appall many on the right today.

Reagan supported legislation as California governor to liberalize state abortion law. As an ex-president, he endorsed the Brady handgun bill. During his presidency, he agreed to several tax increases, approved of a path to citizenship for undocumented immigrants, negotiated with terrorists and headed a government during which the national debt grew out of control and spending increased significantly.

From the left these days, we occasionally hear references to that Reagan practicality, almost as if they miss the Gipper. For those, the book offers a number of reminders of the reason the left so despised Reagan. The extent of his vitriol towards 1960s demonstrators against the Vietnam War, or for civil rights or women’s rights is shocking. His predictions of social doom and of dominoes falling internationally all proved baseless.

A decade after his death, the public holds several other incorrect perceptions of Reagan. No, he didn’t have a warm relationship with House Speaker Tip O’Neill. He found him insufferable. No, he wasn’t a lightweight and figurehead. Reagan read a great deal, studied his topics and was generally knowledgeable. But he wasn’t a detail person. He saw the big picture and left the details for others to work out. Turns out there was some truth to the great Saturday Night Live skit, Mastermind.

In the most compelling segment of the book, that dealing with strategic arms limitation negotiations, Reagan comes off very well. He studied the Soviet system, the lives and politics of his negotiating partners and, then, in the negotiation room, he led the discussions.

Brands’ accounting of Iran/Contra certainly lends credence to those who felt Reagan willfully avoided knowing what Oliver North and John Poindexter were doing.

Reagan embodied a number of contradictions: A deeply religious man who didn’t go to church, a hard-right politician determined to dismantle the social welfare state who admired President Franklin D. Roosevelt, an advocate of family values who had serious shortcomings as a father.

Finally, Brands tells us, Reagan “was not a warm person but he seemed to be.” All of that gosh-darn friendliness was just a cover for a man who had trouble expressing a full range of emotions and fear of letting others get too close.

Many Reagan acolytes will read this book as preparation for his canonization. Others will hope it damns him. It does neither. It’s a fair and engrossing accounting, good and bad.

1 Response to The real Reagan