Just in time for the movie

I’m hearing good things about the new movie version of Far From the Madding Crowd, and I hope to see it sometime.

But before seeing a movie adaptation of a classic novel, I wanted to read the novel. Despite having been an English major, I’d never read this book.

Fortunately, Random House Audio has produced a new, unabridged audio version of Thomas Hardy’s 1874 novel. Whether you see the movie or not, I recommend the experience of listening to an expert dramatic reading of the story the way the author wrote it. 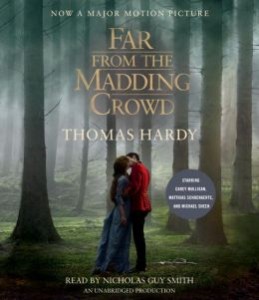 Bathsheba Everdene is beautiful, passionate, headstrong, vain, independent – and young and naive. Far From the Madding Crowd, Thomas Hardy’s first literary success, is, in part, the story of the events triggered by that volatile combination of traits in a young, 19th-century English woman who is unusually free of family and to shield and restrain her. It is the story of Bathsheba, the three men who love her, and the tragic events set in motion by thoughtless actions.

The setting is rural England, in Wessex, a land of sheep farms and country villages.

Gabriel Oak, a serious young man, has, after years of hard work, gone into debt to have his own sheep farm. Not long after he meets Bathsheba, he proposes marriage to her. She has no fortune at the time, but she declines his proposal, saying she doesn’t love him. With his pride and heart wounded, Gabriel resolves to keep his feelings to himself in the future.

After a terrible accident causes Gabriel to lose his sheep, he must abandon his dreams of having his own farm and set off in search of employment. As fortune would have it, the sturdy, brave Gabriel comes upon a fire at a farm and heroically averts disaster. The farm, as it turns out, is the property of Bathsheba, who recently inherited it from an uncle. She hires Gabriel as a shepherd, although from time to time she fires him because his blunt honesty sometimes offends her. Always, though, she must rehire him, because he’s indispensable.

A thoughtless prank on Valentine’s Day awakens the long dormant romantic interests of Mr. Boldwood, a sober, well-to-do middle-age bachelor who has a neighboring farm. Bathsheba didn’t mean to make Boldwood fall in love with her, but having done so, she must try to deal with his wooing. She tries declining on grounds that she doesn’t love him, either, but he’s so persistent that she finds herself giving him reason to hope.

Enter the third suitor, Sergeant Troy, who’s a dashing figure in his uniform, a slick talker and burdened by far fewer principles than either Gabriel or Boldwood. Almost without meaning to, Bathsheba finds herself married to Troy, setting in motion the unfortunate developments that build to the story’s climactic events.

Throughout, Gabriel is as sturdy as the tree whose name he bears, a friend to Bathsheba even when she does not deserve his devotion.

Hardy is describing a rural world largely untouched by the Industrial Revolution. The characters in this novel are far from any crowds, far from the urban woes Charles Dickens writes about years earlier. And yet they must confront human nature, with all its imperfections. Gabriel, Bathsheba and the others live in a provincial world with old-fashioned values that can mean harsh consequences for human failings.

This is a love story, and also very much a period piece. Hardy does not just tell his story; he comments on what’s happening and on the eccentricities of the society and characters he describes, often with dry humor. His observations enrich the sometimes-understated story.

Read by Nicholas Guy Smith, the story comes alive in an entertaining and satisfying way.  And now, having listened to the book, I’m ready to see this story translated into film.