The real dangers on campus

Paul O’Connor is a father. He’s a veteran journalist. And he teaches college students. He has considerable insight into this book, and he says that every parent should read it. 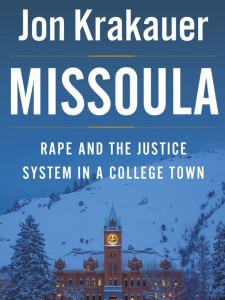 In November 2014, Rolling Stone magazine sought to chronicle the crisis of sexual abuse and assault on American campuses with what turned out to be a highly flawed article, “A Rape on Campus.”

What Rolling Stone failed to accomplish in that now disavowed piece, Jon Krakauer has forcefully presented in Missoula: Rape and the Justice System in a College Town.

This is one of the most unsettling books I’ve read. It is a story of rape, binge drinking, incompetent policing and neglectful prosecution, of a community more concerned about football than the safety of its own daughters, and of privileged young men unaware that their brute strength does not entitle them to have sex on their whims.

Krakauer primarily follows two cases, both involving football players, while setting these two stories in the larger context of a small Montana city embroiled in multiple rape and gang-rape allegations, many involving players on the much-loved University of Montana Grizzlies team.

In both of the featured cases, the woman knew the man before the incident occurred; in one, they had been friends since childhood.

Krakauer guides us through the relationships prior to the incidents and then through the criminal justice system as rape allegations are tried.

This book is an outright indictment of the Missoula County Attorney’s Office, the prosecuting entity in the city. The foremost villain is the surprisingly callous assistant prosecutor, Kirsten Pabst, who oversaw sexual abuse cases for the county. The city’s police force is presented as less than competent but not villainous. And the university gets a mixed grade: good marks to the administration, bad to the athletics program, its boosters and fans.

While this is a compelling read or listen, it is one that will make the typical parent ill. And that’s why every parent of a child – boy or girl – over the age of 10 should read it. Soon. Take your poison, and then get to work on your kids. Make them understand the dangers on campus for both genders.

There is a modus operandi on campus, be it at fraternity or house parties. Target young, innocent females, invite them to parties, get them drunk as quickly as possible, and then retreat to a room where they can be raped.

Other iterations of this tactic involve any college woman attending any kind of a party and who drinks to the point of being incapacitated. Hold her down, peel off her clothes, have sex. Go drink some more.

Probably the most startling aspect of the story is the naiveté of the students involved – the females who get muscle-melting drunk and the males who consider it acceptable to have sex with women who cannot provide consent, or who say no but are not strong enough to resist.

Krakauer provides considerable detail about the prevalence of rape in Missoula and nationwide, and conscientiously notes that Missoula’s rape frequency is slightly below the national average.

Rolling Stone hoped to start a national dialogue on the sexual abuse problem on campus, but only managed to stain its own reputation with poor reporting. Krakauer, working largely from court records, university documents, government reports and interviews with those involved, has presented us with material for every reading club and, I would hope, more than a few university summer reading lists.

This entry was posted in Audio Books, Contemporary Nonfiction, Law and justice and tagged Jon Krakauer, Missoula, Rape on campus. Bookmark the permalink.