A different view of Bunker Hill

About  a year ago, Paul O’Connor acquired an audio version of a history of Bunker Hill and the origins of the American Revolution, and then promptly forgot it. Recently he found the book, began to listen – and found there was a lot to learn about that history. 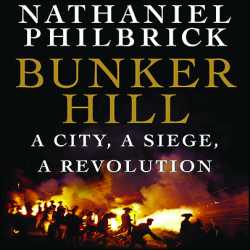 On June 17, 1775, American militiamen occupied Breed’s Hill on the northern side of Boston, thus posing a serious threat to the British forces who, two months earlier, had been penned inside the harbor town after the battles at Lexington and Concord.

British Gen. Thomas Gage decided he had no choice but to contest the occupation of both Breed’s Hill and its neighbor, Bunker Hill.

The patriots had the high ground and were excellent fighters, many of them more experienced than the attacking Redcoats below. But they were low on gunpowder and outnumbered.

The Americans devastated British forces, slaughtering them as they attacked uphill. Total British casualties were 1,054, including many officers. Had the Americans not been short on gunpowder, they might have held the hills, destroyed the Crown’s America-based army and set North America on a very different course through history.

How had things come so far? How had American-British relations soured to the point of such bloodshed?

American school children learn of Parliament’s taxation without representation and of the Boston Massacre, the Tea Party and Paul Revere’s ride. But that’s the Twitter account. Nathaniel Philbrick has provided us a much more detailed answer in this exciting read – or in my case, exciting listen – about not only that one-day battle but also the origins of New England dissatisfaction with Great Britain in the 1760s and 1770s, the escalation of the colonists’ defiance and, eventually, the decisive acts to openly rebel.

Philbrick’s main character is neither John nor Samuel Adams, the two patriots most frequently mentioned regarding the New England revolt. Instead, Philbrick focuses on Dr. Joseph Warren, the popular leader of the Massachusetts Committee on Safety, who led the colony while the Adams cousins were in Philadelphia attending the Continental Congress.

What we get, then, is a very different perspective from most written about the early days of the War of Independence. Philbrick goes into great detail to chronicle the evolution of legal, social and political attitudes that brought New England into open rebellion and then separation from Great Britain. It wasn’t as simple as Boston Massacre, tea party, and then “one if by land, two if by sea.”

Warren was at the head of that evolution, steering the committee on safety and gradually bringing the colony’s outlying settlements, neighboring colonies and, eventually, the Continental Congress to support his positions.

Philbrick is a popular writer of history, not an academic. He brings considerable storytelling skills to an episode in American history that is complex, that is often mired in lore and sentimentality, and that gets encrusted with Puritan sensibilities. He takes a great story and tells it well.

What if Warren had not permitted then-Col. Benedict Arnold to undertake what turned out to be an unnecessary campaign to seize Fort Ticonderoga, carrying with him 200 barrels of gunpowder? Would that powder have been sufficient for the Americans to hold these two hills on June 17?

And what if Warren hadn’t been killed on Breed’s Hill? Might he, with his considerable political skills, have risen as an alternative to George Washington as America’s leader, or at least provided General Washington with better advice on running the siege of Boston in 1775 and 1776?

This audio book sat on my desk for nearly a year after its release in 2014. Once I started listening, I consumed it in less than four days of listening.