Paul O’Connor finds that frequent digressions make this book all the more rewarding. 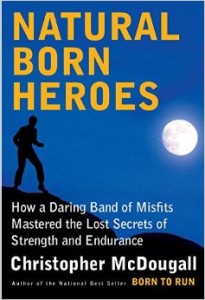 In May 1944, British agents and Greek resistance fighters accomplished one of World War II’s most remarkable special ops. They kidnapped the commanding general of Nazi Germany’s 70,000-strong garrison on Crete.

The Germans were dumbfounded not only by the audacious abduction but also by the getaway: If the general were still on the island, as all but the most ridiculous of contrived clues indicated, how could the abductors have escaped across the razor-sharp rocks and forbidding terrain of the island?

Christopher McDougall uses that question to present his argument that humans have natural strength and inherent abilities that go far beyond what we employ today.

The book is built around British agents plucked from the nation’s artistic and intellectual circles not for their soldierly skills – they had few of those – but for their imaginations. Winston Churchill wanted a behind-the-lines force creatively terrorizing the enemy.

Kidnapping the general would only terrorize the Germans, however, if the abductors got away with him. To do that, the agents would have to exhibit the primal physical capabilities modern man has lost but that survive among the Cretan population.

And to explain how Cretans could survive on little or no food and water while traversing outrageously rugged landscape with German pursuers hell bent on catching them, McDougall provides his readers and listeners with a wide-ranging liberal arts education.

Listening to the book brought to mind Victor Borge, the renowned pianist and comedian who would annoy and amuse his audiences by starting to play only to stop abruptly to tell a story. That’s what McDougall does to us: He starts to tell the story of the kidnapping, its planning and execution and the attempt to escape, but every time we get rolling, it’s off on a tangent, maybe on nutrition, The Iliad, a school teacher/hero in Pennsylvania, or why corporate gyms and exercise machines really don’t do us much good. (I listened to this book, by the way, while on an elliptical trainer at my gym.)

Then there is the other story he tells: his quest to piece together the full story of the operation, including a replication of the arduous climbs and descents the agents undertook.

Despite the digressions, I loved the book, and wish I had climbed off the trainer and scribbled down a few nutritional and exercise tips.

McDougall’s primary point is that man has lost natural skills that kept him healthy and strong. On Crete, those skills survive – and so we can reacquire them- and that is how the abductors got away. But, whether they actually got the general off the island, I won’t say.