I was already riveted by the early chapters of Dead Wake when Paul O’Connor emailed to tell me he was listening to the book, and it was terrific. I deferred to Paul for the writing of the review because he reads more historical nonfiction than I do – and because he finished first.

I say a hearty “amen” to all the praise he gives to the book. Like Paul, I enjoyed the way Erik Larson wove together the stories of the Lusitania, the German U-boat that sank her, the British Admiralty and the many people involved. I also liked the deft way he connected this story to the greater context of what was happening in the broader war and in the United States, where President Wilson was dealing with personal struggles.

And I would add that having listened to Scott Brick read many a Clive Cussler adventure novel, I wondered if I’d be able to adjust to hearing his voice narrating history. He did a fine job, modifying his usual dramatic tone in exactly the right way.

She had not stopped outside New York to take on passengers being transferred from another ocean liner.

She had run across the Atlantic at top speed. 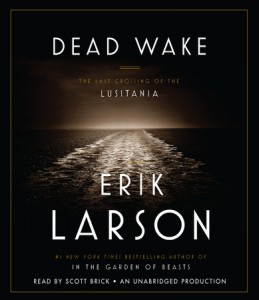 The fog had not lifted off the coast of Kinsale, Ireland, in late morning May 7, or it had not slowed the ship for hours the previous day and night. Or the Lusitania had not made a course correction that led it right into the periscope sight of its assassin.

The Lusitania might have safely reached Liverpool, England, and the lives of 1,198 civilians would not have been lost.

On the afternoon of May 7, Germany’s U-20 sank the luxury liner Lusitania, the crown jewel of the Cunard Line, with a single torpedo, hitting an entirely lucky shot in just the right spot to set off secondary explosions on the ship and sink her in less than a half hour.

The shot was lucky first because the torpedo actually fired – often they didn’t in 1915 – and second because the U-boat’s captain had miscalculated his target’s speed. Had he hit the spot of the ship at which he was aiming, the ship most likely would have survived.

There is another “if only” that Erik Larson, in his thrilling new book, lays out. If only the British Admiralty had done its job.

British intelligence knew that Capt. Walther Schwieger, who was known to be a ruthless submariner, was operating his U-20 in the shipping- rich waters into which the Lusitania was headed. The British Admiralty failed to provide escort protection for the ship or to direct it along a safer course. Cautionary messages sent to the Lusitania were confusing, contradictory and incomplete.

None of this information is new. There is so much evidence of British incompetence in the handling of the Lusitania’s passage that a number of conspiracy theories survive as the 100th anniversary of the sinking approaches.

Why would the British conspire to have one of their own ships sunk by a German submarine early in the Great War?

Because this particular ship was packed with Americans, many of them prominent Americans, and the loss of so many lives might just be enough to draw the U.S. into a war it did not eventually enter for almost two more years.

What is new in this book, of course, is Larson, the master of long form nonfiction, a popular historian who culls the historical record to assemble a story that reads like fiction, and this one reads like Peter Benchley’s Jaws. As the passengers enjoy their luxurious voyage across the ocean, the predator lies in their path. Neither the shark nor the bait knows what lies ahead, but the reader does, and Larson builds the tension expertly.

Typical of his earlier work, Larson in Dead Wake tells the stories of the many characters involved, be he the captain of the ship, the lord of the admiralty, the prominent bookseller headed to London or the boy with measles quarantined below deck with his mother.

The tension for the reader: Who among the profiled will survive and who will die?

This is a book every reader will have trouble laying aside. As for the audio version, I found myself formulating excuses to get in the car for a half hour to listen through the sound system, or on the elliptical trainer with headphones, to hear the next chapter expertly read by Scott Brick.