Memory is such a complicated thing. It’s always fascinating to compare memories with a sibling or other person with whom you shared a long-ago experience. Sometimes details will be radically different; sometimes one person may have no recollection at all of something that made a vivid, lasting impression on another.

Case in point: I’ve recently reconnected with the person who was my closest friend in junior high and high school. One day I remarked that I had many fond memories of spending the night at her house, but none whatsoever of her coming to mine. Did I never reciprocate? She replied that she had vivid memories of spending time at my house, proceeding to tell me details about riding horseback and picnicking at the creek, and of my uncle arriving from out of town and taking us for a ride in a convertible. But she had no memories of my staying at her house.

In his impressive new novel, M.O. Walsh writes about memory – and much more. 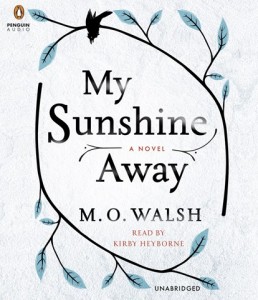 Let’s get this much straight: My Sunshine Away is not a murder mystery. Some of the hype might lead readers to think that’s what they’ll be getting if they try this book, but it’s quite different from most whodunits, even when compared to those that are heavier on psychology than on action.

Instead, this is in many ways a coming-of-age novel. It’s told by a man looking back on the summer of 1989, when his world changed, and on how the events of that summer affected him and the girl he loved.

There is a crime, an ugly and devastating crime that shatters the seemingly idyllic suburban neighborhood on the edge of the swamps at Baton Rouge, La. The narrator was then a 14-year-old boy, living what on the surface seems an ideal life in a neighborhood where families often gather to for backyard crawfish feasts and kids can roam and play without fear. Most of the families are comfortably well off; most of the children attend a venerable, nearby private school.

Lindy Simpson is a star, a standout even in this picture-perfect world. She’s smart, beautiful, spunky and athletic. Our narrator, a year younger and a grade behind in school, grew up playing with her. As adolescence shifts into high gear, his feelings for her as a great pal are becoming more complex.

One summer evening as she’s riding home, right on schedule, from track practice at the school, Lindy is savagely attacked, raped and left, stunned and forever changed, to stagger home.

With that, My Sunshine Away does become a mystery. Lindy’s family wants the culprit caught, and police manage to come up with a short list of suspects. Our narrator is on the list. The question of who really attacked Lindy is a major theme throughout the rest of the book.

But who perpetrated “the crime,” as the narrator comes to refer to the rape, is far from the only theme. Life goes on, even after shattering events, and we follow the teenagers and their friends and classmates through high school.

A dramatic, even terrible event is not isolated, the narrator gradually realizes. What’s important is how people move on, and whether they are defined by what has happened. Also important is forgiveness, for those who have wronged us, as well as for our guilty selves.

Just as the young narrator does, we learn the painful truths that linger below the surface in even a tranquil, affluent late 1980s neighborhood. We learn the secrets, agonies and heartbreaks. Families are not as happy as they seem. Innocence gives way to cynicism or despair.

The narrator, looking back on his adolescence from a more mature future life, is at times appalled at his youthful obsessions and callowness, and so are we. Sometimes, he wonders how much to trust his memories, and we wonder how much to trust his account. But we like him as we would care for a troubled but promising teenager, and the story is compelling as we want to know what really happened, and what happened after that.

The writing is often beautiful, especially in descriptions of the natural world in which these children grew up. It’s insightful and sometimes painfully – even frighteningly – frank in its depictions of the thoughts and actions of a teenage boy obsessed with a girl.

I have two complaints. One is the amount of attention and space given to the effects that Hurricane Katrina had on Baton Rouge, primarily in the form of refugees from New Orleans. The hurricane hit in 2005, long after “the crime,” and during a time in the narrator’s life that is otherwise little described. What M.O. Walsh writes about Katrina is interesting, but it’s hard not to think that it belongs in a different book.

The other is that there are enough basic grammatical errors as to be distracting. I listened to the audiobook, ably read by Kirby Heyborne, so I didn’t make notes of the errors, but I found them annoying. The narrator is a college-educated adult professional, so there’s no apparent reason for him to speak ungrammatically. The lapses took me out of the story. The sad thing is that they would have been so easy for an editor to fix, and doing so would only have made the book better.

That said, the story is worth the read or the listen, and I look forward to Walsh’s next book.