Plenty of reasons to read

One danger in a long-running detective series is that the stories might get stale. Bob Moyer finds that the Alex Delaware series may be predictable in some ways, but it’s still worth reading. 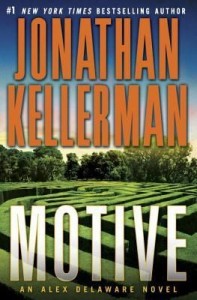 After following the adventures of this odd, now old, couple – Milo, the slovenly, overweight, somewhat churlish gay LAPD lieutenant and Alex, the well-kempt, urbane, empathetic psychologist – through 29 novels, Jonathan Kellerman fans need a strong Motive to make it through another one. After all, the series is nothing if not predictable. Probabilities are that they will eat at the Café Moghul (they do); Alex will make light of Milo’s appetite (he does); Milo will raid Alex’s refrigerator at least once (yes); and they will bumble down numerous blind alleys until they bump into something that supplies Alex with the solution. What on earth would make us want to follow them again?

Well, confesses a fervent reader (me), just that — the comfort of their familiar company and the high probability that Kellerman will come up with a competent plot. Fortunately, all that is here, along with better-than-average banter, and some new light shed on not just the camaraderie of the two, but also their companionship.

Kellerman also gives us a glimpse of the depth of affection between the two that he doesn’t often delve into. “There you go again doing that optimistic thing again,” says Milo, frequently. Alex doesn’t reply, but muses, “I doubt he knows that it’s learned behavior, not instinct. Growing up with a chronically depressed mother and a violent boozehound father, you figure out a survival strategy or you perish. Friendship’s a fine thing but in the end we all walk alone. Milo’s my best friend. No reason to disillusion him.” So much said with so little, about the two of them, and Alex’s past. Variations on these familiar elements give added Motive to fans’ guilty pleasure in this series.

So does the Motive behind the murders in the book. Each murder is accompanied by a meticulously laid-out dinner, each meal with a theme. Kellerman buries the killer and his Motive deep in the details of the seemingly unconnected victims, so deep there’s little hint of the killer until a couple of pages before Kellerman turns a plot corner we really didn’t see coming. All in all, Kellerman gives us guilty pleasure galore, and a well-hidden villain who gets his just deserts. That’s Motive aplenty to read this 30th episode.