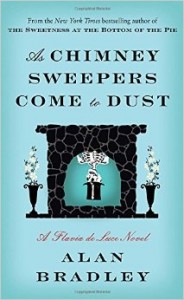 What a relief! Or, as Flavia would shout, “Yaroo!”

When I reached the end last year of The Dead in Their Vaulted Arches, the sixth book in Alan Bradley’s wonderful series about Flavia de Luce, I was worried.

Through five books, Bradley had delighted me with the adventures of Flavia, a precocious, lonely 11-year-old girl living in a crumbling mansion near an English village in 1950. Flavia’s mother had been missing in mysterious circumstances for 10 years, during which time Flavia’s father had been so overwhelmed by grief and financial problems that he paid little attention to Flavia and her two older sisters. And the sisters regularly tormented Flavia, making her feel that she was a changeling or somehow responsible for their mother’s disappearance.

Flavia, an endearing blend of brilliance and innocence, amused herself with experiments in the extensive chemistry laboratory left in a remote part of the mansion by a deceased uncle. She also solved murders, which seemed to happen with alarming frequency in the quiet English countryside.

Then in the sixth volume, change comes with a vengeance. The body of Harriet, Flavia’s missing mother, is found and shipped home for proper burial. As visitors – some distinguished, some mysterious – arrive for Harriet’s funeral, Flavia begins to learn secrets about her late mother’s activities, secrets that seem to involve Flavia herself. And then she turns 12 and is told that she’s being shipped off to Canada to attend the boarding school where her mother once studied.

I feared that Bradley was going to change Flavia and the series, that Flavia would grow up too fast. She apparently is the heir to her mother’s role in some secret society, and while spy novels or whatever Bradley was going to write now might be entertaining, they couldn’t be the delightfully eccentric mysteries Flavia’s fans had come to love. And how could a girls’ school in Toronto be half as interesting as Buckshaw, the deteriorating de Luce mansion, and Bishop’s Lacey, the nearby murder-prone but charming village?

Without giving too much away, I am pleased to report that in book No. 7, even though she’s reached the mature age of 12 and been “banished” (her word) to Canada, Flavia is still very much Flavia.

And, even though she’s been sent to a boarding school in Toronto, Flavia still finds mysteries and murders. In fact, hardly has she arrived at Miss Bodycote’s Female Academy when a charred, mummified body wrapped in a Union Jack tumbles out of the chimney into her bedroom.  Flavia, of course, is determined to solve that case, as well as other troubling rumors and events that haunt Miss Bodycote’s.

Flavia is, after all, only 12, and she still knows a lot more about chemistry than she does about life. Always irrepressible, she’s no more inclined to follow the rules of Miss Bodycote’s, or of the secret society about which she knows very little, than she was to obey the rules of the Girl Guides back in England.

The result of all this is a delightful story that has Flavia wandering the streets of Toronto as well as the halls of Miss Bodycote’s. Her knowledge of chemistry still comes in quite handy.

She solves some of the mysteries, but the one that affects her most – the truth about the legacy and responsibility she has inherited from Harriet – is still largely mystifying, presumably to be revealed bit by bit in subsequent adventures.

As I have before, I indulged in a double dose of this Flavia story. When the printed book arrived, I couldn’t wait to read it and discover what Flavia was up to. Then when the audio book arrived, I could not wait to listen to Jayne Entwistle make Flavia come alive, with her endearing, humorous voice that perfectly blends childish innocence and uncommon intelligence. The contrast of Flavia’s Englishness with the accents of the Canadians who surround her makes As Chimney Sweepers Come to Dust, if it’s possible, even more entertaining read aloud than its predecessors.