Flesh, blood and bones enough to go around

Patricia Cornwell deserves lots of credit for creating a whole new genre of crime fiction, one that inspired other books and even TV shows. When she drew on her years working in the office of the chief medical examiner for Virginia to write her first Kay Scarpetta novel, published in 1990, nobody was writing forensic thrillers. Now they’re a staple.

Because Cornwell grew up in North Carolina and graduated from Davidson College, I reviewed that first novel, Postmortem, for the Winston-Salem Journal and interviewed the author, who at the time was eager for the publicity. Like many readers, I loved the book and found its glimpses into the world of autopsies and crime labs fascinating.

Now having written 22 novels starring Kay Scarpetta, the (now) former chief medical examiner in Richmond, Cornwell has gotten the credit she deserves, over and over. She’s also earned instant best-seller status, millions upon millions of dollars, and fame and success as a popular woman writer that’s second perhaps only to that of J.K. Rowling.

None of that means, of course, that Cornwell can rest on her laurels. Fans can be demanding, and one way or another, an author must keep delivering. Fans will automatically buy the latest book out from a favorite author – but with limits. If they find one disappointing, they’ll usually give her the benefit of the doubt and try the next one. But at some point, many readers get fed up look elsewhere for their thrillers.

That’s what happened to me and quite a few other Cornwell fans several years into her Scarpetta saga. I can’t remember which book was the final straw for me, but I do recall that Cornwell went through a spell when she seemed to put her political rants and causes ahead of her stories. The novels just weren’t very entertaining anymore, and I stopped reading them.

That’s one of the reasons audio books can be so worthwhile. I wasn’t inclined to pick up a print copy of a recent Scarpetta novel, but when an audio version came my way a couple of years ago, I was willing to give it a try. 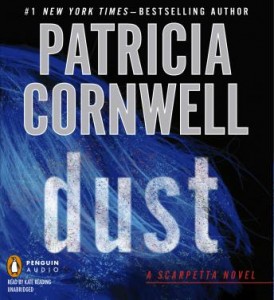 Since then, I’ve listened to a couple more, most recently Dust, the 21st Scarpetta novel. They’ve been, if not as good as her earliest efforts, better than much of what’s out there.

Dust provided some good listening. Scarpetta, for those who might not have followed all the twists and turns of her personal and professional life, is now the chief medical examiner for Massachusetts, living in Boston. Having just returned from helping with the autopsies at a terrible school shooting in nearby Connecticut, she’s feeling down. But she must rise to the occasion when Detective Pete Marino, her longtime friend and until recently her employee, calls to tell her about a mysterious murder.

The body of a woman has been discovered in what should be a safe area on the MIT campus. She’s oddly draped in a strange cloth and her body appears to have been posed. The woman is a computer engineer whose highly publicized $100 million lawsuit against her former financial advisers was about to go to trial.

The more Scarpetta learns about the apparent murder, the more troubled she is. There may be some connection between the victim and Scarpetta’s niece Lucy, the computer whiz, who also has moved to Boston and consults with Scarpetta’s office. And there may be a connection with the Capital Murderer cases that Scarpetta’s husband, FBI agent Benton Wesley, has been working on in Washington. Ominously, Benton suspects that some highly placed people don’t want the murderer caught.

Before the case is closed, there are high-tech forensics, a good bit of danger and surprising twists and turns, all the stuff of a satisfying thriller.

Cornwell seems to have worked through much of what prompted her to turn some of her novels into political diatribes. She’s gotten back to telling a good story, and she seems to be on top of the latest developments, whether drones, designer drugs or computer technology.

Unfortunately, though, some of the aspects that have made her novels less enjoyable over the years linger. It strains credulity that there’s always a grand, sinister conspiracy that involves not just Scarpetta but also her husband, usually her niece and often Marino. Beyond that, these characters have not become more lovable through 22 novels. Often, there seems to be no one to care about. The apparently amoral Lucy is especially offensive; Marino is downright obnoxious. It can be pretty hard to sympathize with Scarpetta.

And Cornwell’s writing seems to be sloppier than it once was. For one thing, she has an annoying penchant for writing long, compound sentences strung together with “and,” to the point that a high-school English teacher would tell her to vary sentence structure and break up some of those long sentences for better emphasis. Kate Reading does an overall fine job with the recording, but the prose gets a little singsong at times. 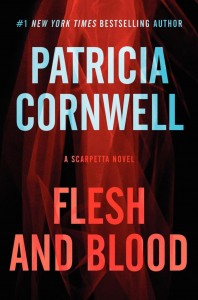 Which brings me to the most recent Scarpetta novel, which I read in print. Flesh and Blood has most of the same strengths and weaknesses as Dust. The mystery is interesting, and there’s plenty of danger. It all starts when Scarpetta is on the back patio of her Boston home when she notices a glint of copper – seven pennies lined up on the wall, all looking brand new, and all dated 1981.  Worry begins to could the good mood she’s been in, anticipating her birthday vacation in Miami with Benton.

Then Detective Marino calls with news of a murder just minutes from her house, a chillingly efficient sniper killing. Before long, Scarpetta is dealing with serial sniper attacks in what seem to be randomly unconnected locations. The case takes her to New Jersey and eventually underwater, scuba diving a shipwreck.

It’s a good enough page-turner, but the problems remain: There never seems to be a case that doesn’t involve Scarpetta’s family and “friends.” The friends don’t much like one another, and I find myself not much liking them, either. In print, the careless writing can be soporific, not what you want in a thriller. 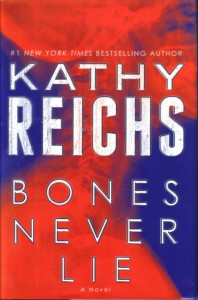 Fortunately, if you like forensic thrillers with strong women protagonists, there are alternatives. Patricia Cornwell did pioneer the genre, but it would be wrong to dismiss those who have followed as mere imitators.

Kathy Reichs, the best-selling author of 16 Temperance Brennan novels, is giving Cornwell a run for her money. Her books and her life have inspired the popular TV show Bones.

Cornwell blazed the way, but Reichs has impeccable credentials for a forensic novelist. Like her character, she is a forensic anthropologist, and advises the police in Canada in addition to her work in the U.S. Interestingly, she shares a connection with the Charlotte area of North Carolina with Cornwell.  Reichs teaches anthropology at UNC Charlotte.

She’s also a good writer, and she has a winning character in Tempe Brennan.

In Bones Never Lie, Brennan is called into the Charlotte Police Department’s Cold Case Unit. A homicide detective from Vermont has reason to believe the murder of a child in that state has links to North Carolina and to Brennan.

This development brings back unwelcome memories of a case in Canada in which a murderer who preyed on girls managed to slip away from Brennan and her sometime partner, Detective Andrew Ryan,

Like Cornwell – like most crime authors who follow their characters through many years and many novels – Reichs has Brennan deal with changes and challenges in her personal and professional life, among them her relationship with Ryan. Unlike Cornwell, she manages to make us care about those characters, even when they make mistakes.

The mystery is a good one, with enough danger to warrant the thriller classification. The forensics are interesting, And there are second chances – both to stop the killer, and in personal relationships. Redemption can be sweet.

I’ve not read all the Temperance Brennan series, but I’ve enjoyed all those I’ve come across. Each stands alone, and they are outstanding as audio books, gripping and easy to follow.

Readers owe Cornwell a big thank-you for blazing the trail for forensic thrillers. For now, at least, I find Kathy Reichs’ books more satisfying. But I’m quite willing to keep trying both series. Whose next book will be better? Happy the reader or listener who has the chance to decide