A few years ago, I flew as a passenger in a small private plane over a mountaintop-removal coal mine in West Virginia. The image of that huge, ugly wound on what had been a beautiful wilderness still haunts me. Most people will never see the ravages of modern strip-mining up close, but John Grisham’s new novel does a good job of bringing the harsh reality to life. 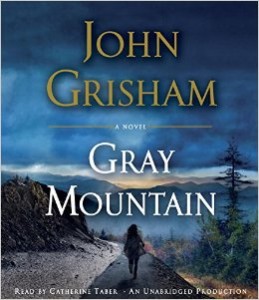 At 29, Samantha Kofer is right on track with her life plans. Having grown up the privileged only child of two Washington lawyers, she graduated from an Ivy League law school and is an associate in a huge Wall Street law firm. If all goes well, she’ll be a partner and wealthy before many more years go by.

But it’s 2008, and fate – in the form of the Wall Street meltdown and the subsequent recession – intervenes. She’s laid off, escorted unceremoniously out of the building. The only sop the firm throws her is the opportunity to keep her benefits and maybe get her job back eventually if she puts in a year as an unpaid intern at some worthy nonprofit.

Still in shock, Samantha finds herself starting work at a legal-aid clinic in Brady, Va., a remote coal-mining town in the state’s impoverished far southwest corner. Her boss is Matty Wyatt, who’s lived in the area all her life and knows its people and problems intimately.

In her more introspective moments, Samantha realizes that while her work in New York was prestigious and financially rewarding, it was also largely boring and unfulfilling, little more than proofreading intricate real-estate transactions. Matty promises her that whatever its problems, work at the legal-aid clinic will not be boring. Samantha, she assures her, will learn a great deal about real people with real problems.

That she does – all day, every day, the poor and oppressed find their way to the clinic: battered wives, homeless families, lonely widows. She learns about the problems associated with the scourge of meth manufacture and addiction.

And more than anything, she learns about the devastation caused by the big coal-mining companies that more or less own that part of Appalachia. She learns, for example, about the stalling tactics the coal companies use when it comes to compensating miners stricken by black-lung disease – tactics that often lead to the miner’s dying before he gets help. She sees that regulations are only as good as their enforcement, and that smart corporate lawyers make sure the rules can be skirted or even broken with impunity. She sees the strong-arm tactics that coal companies use to get the tracts they want, and marvels at the way many area residents support the coal companies against their own best interests, all because of the promise of a few jobs.

Don’t worry; this book is not a polemic or political tract. There’s plenty of story here. One major thread is Samantha’s coming-of-age as a lawyer; reluctantly, she learns about litigation, files her first lawsuit, argues in court for the first time. Gradually, she realizes the power of the law and the possibilities for its uses.

There’s romance, too, and Grisham does a commendable job of portraying the thoughts and emotions of a bright young woman.

There’s also plenty of mystery and danger, starting with a dramatic death that might not be the accident it at first seems.

I listened, fascinated, to Catherine Taber’s reading of this strong story. I’m happy to say she does not exaggerate the accents of Appalachia, which are far different from those of say, Mississippi. To my ear, she got the speech just right.

This is a strong and important book by a highly talented lawyer/author. His depiction of the growth of a young lawyer is powerful. Even more powerful is his scathing portrayal of the big coal industry whose abuses in a forgotten pocket of our country too often go unnoticed by most of us. Gray Mountain may not be as exciting and fast-paced as some of his Grisham’s earlier tales, but it’s compelling, true and haunting.