Knowing Bob Moyer and how much he travels, I have a prediction: If Martin Walker’s mystery series has made Bob want to visit the Perigord region of France, Bob will be visiting the Perigord region of France. One day, I’ll be hard at work in Stokes County, N.C., and my phone will ring. When I answer, I will hear Bob saying something like, “I’m in a café in Sarlat, eating foie gras and truffles and ….” Yes, he tortures me that way. 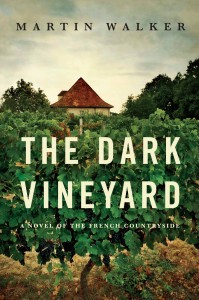 With this series, Martin Walker has done for the Perigord region of France what Peter Mayle did for Provence — make us want to go there.  The first two books are love letters to the region, thinly (but expertly) disguised as provincial police procedurals based in the small French town of St. Denis.

As in many other villages, the times have caught up to this pocket of charm; the fishmonger’s shop is now an insurance agency, and one of the two groceries now services computers.  “It was no longer the St. Denis Bruno had first come to, a decade ago, when the small towns of rural France still retained the shops and texture he remembered from his boyhood.”

Bruno, Chief of Police (the first book’s title), is actually the entire police force.  It’s more than a job for him, however.  In his eyes, “… a great part of the law’s duty was to uphold the grand traditions of France and of St. Denis,” and Bruno takes on that responsibility.  There is great pleasure in watching him foil federal investigators searching for illegal foie gras at the local farmer’s market, or deploy members of the town rugby team to defuse violence at a demonstration against genetically modified crops near town.  The clandestine operation was discovered only after an arsonist burned the fields and blew up the barn.

Matters are complicated when an American wine magnate announces plans to buy up land and vineyards in the region for a major winery — if there are no complications arising from “terrorist” activities.  Everyone wants the case solved; everyone descends on St. Denis to make sure it is — the national police, the Ministry of Agriculture and even a terrorist task force.

Bruno is challenged to avert violence, both from unknown perpetrators and the known ones like the wine magnate.  Further damage is done when two beloved citizens turn up dead, and the magnate turns out to be a prime suspect.  The fabric of his beloved town’s life may be rent asunder unless Bruno can come up with a solution.

On his way to resolution, Bruno stops frequently to appreciate the scenery:  “The golden stone of the old bridge and the local buildings glowed warmly in the mid-morning light.  The clock on the Mairie pointed to ten a.m. and the bells of the church in the Rue de Paris began to strike.”

His investigative skills, coupled with his intuitive understanding of his neighbors, lead him through the attractions of this challenged community to a discovery of both the murderer and the means to maintain the way of life he loves.

Walker has written a book that, like the local wine, is “true to its terroir” and definitely to the taste of Francophiles, oenophiles, and many of us who are neither.

This entry was posted in Mysteries. Bookmark the permalink.