What do bison, prairie dogs, nuclear weapons and cable TV have in common?

As I’ve said before, it’s a pleasure to receive a review from Tom Dillon, because he writes well, thinks clearly and reads interesting books. He’s also willing to try something different. 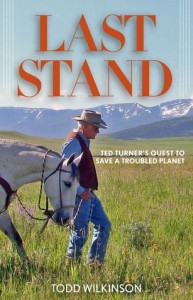 Authorized biographies aren’t normally my cup of tea, and I went into this one with a bit of trepidation, which I’m happy to say turned out of be unfounded. I guess I should have known.

I read the book for several reasons. One is that Todd Wilkinson belongs to a writers’ group of which I am also a member, and while I don’t know him, I generally respect work that comes from the group’s members. A second reason is his earlier critically acclaimed book Science Under Siege: The Politicians’ War on Nature and Truth. It sounds like something up my alley.

In this case, Wilkinson says he was attempting neither a “hagiography” – the study of a saint – nor a tabloid tell-all. The book is instead about “a complicated man’s investigation of big ideas, the motivations behind them, and what action or inaction could mean” for the future.

He’s succeeded pretty well, producing a readable book that will teach you a fair amount about everything from bison and prairie dogs to nuclear disarmament and cable television – all, of course, wrapped around the outsize persona of Ted Turner.

Less well known is his dysfunctional family upbringing, his friendship with people like Mikhail Gorbachev and Jacques Cousteau, and the reasons he became the largest bison (buffalo) rancher in the nation’s history, with something like 55,000 head on his 15 ranches. One of the few pictures provided of his grazing bison could as easily have come from the days of Lewis and Clark.

The stories are both fascinating and heartbreaking, like Turner’s strict father pulling the young student out of Brown University when Turner changed his major from business to classics; Turner responded by joining the Coast Guard.

Turner has also fought a family tendency toward depression that led to his father’s suicide and even lured Turner himself after the AOL Time Warner debacle in 2001. His detachment probably broke up several marriages, including the one with Jane Fonda.

He had an early fascination with the writing of Ayn Rand, but eventually rejected Rand’s “greed is good” motto. His feeling now: “Capitalism isn’t the problem. It’s how we practice capitalism that has created many of the challenges now facing humanity.” A good part of this book seems aimed at influencing other super-rich people into philanthropy like that of Turner’s.

Wilkinson first met Turner about 1992, conducting an interview for a magazine story, and the two men eventually hit it off to the point that, Turner says, “I started to trust him in ways that I seldom do with writers or even other people.” Turner agreed there would be no preconditions on the book.

Ironically, Wilkinson says, Turner carries no business cards. But he does have in his wallet a printed list of “eleven voluntary initiatives.” Together, the initiatives are a pretty good formula for living an environmentally sensitive life. They are:

*I promise to care about Planet Earth and all living things thereon, especially my fellow human beings.

*I promise to treat all persons everywhere with dignity, respect and friendliness.

*I promise to have no more than one or two children. (Turner broke this one, Wilkinson notes. He has five kids, who are being groomed to take over his foundation.)

*I promise to use my best efforts to help save what is left of our natural world in its undisturbed state, and to restore degraded areas.

*I promise to use as little of our nonrenewable resources as possible.

*I promise to minimize my use of toxic chemicals, pesticides and other poisons, and to encourage others to do the same.

*I promise to contribute to those less fortunate to help them become self-sufficient and enjoy the benefits of decent life, including clean air and water, adequate food, health care, housing, education and individual rights.

*I reject the use of force, in particular military force, and I support the United Nations’ arbitration of international disputes.

*I support the United Nations and its efforts to improve the conditions of the planet.

*I support clean renewable energy and a rapid move to eliminate carbon emissions.