Wacky and oh, so true

Understandably, when newspaper reporters try writing fiction, they’re likely to have a newspaper reporter as a major character. Stephen Roth, who spent 12 years in the trenches as a reporter for newspapers in Missouri and Florida, gives us a good one in Pete Schaefer, an aspiring novelist who’s stuck in a reporting job at the Pridemore Evening Headlight in Missouri. 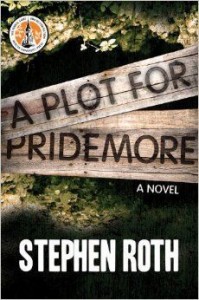 Roe Tolliver has been the mayor of Pridemore, Missouri, for more than 40 years. He’s getting old and tired, but he can’t stop fighting for his beloved town. Ever since the main highway was rerouted to bypass Pridemore by eight miles rather than run right through town, things have gone downhill.

The town and its businesses are slowly dying. Efforts to recruit new industries go nowhere. And then the mayor has a brilliant idea. What if Pridemore were the scene of a major news event, the kind that’s all over network news for days, not to mention the cable channels? What if all eyes were focused on Pridemore? Wouldn’t that put the little town back on the map? Wouldn’t that make it known around the nation, maybe even the world? Wouldn’t that liven things up?

In this small town, there are a few people who get things done, usually with a lot of behind-the-scenes plotting and deal-making that certainly skirt any open-meetings laws, not to mention other legalities. Mayor Tolliver sets about persuading those key people to help him with his intricate scheme.

The plan is to trap a likable, mentally challenged young man deep in a local cave, necessitating a massive effort that would last for several high-profile days before the eventual triumphant rescue. It would be better than the baby-down-the-well drama that had captured the national attention years earlier.

Meanwhile, at Pridemore’s local newspaper, the Evening Headlight, young Pete Schaefer longs for the big story that will rescue him from endless days of writing obits and covering boring meetings and inane features. This is not what he envisioned when he’d gone to journalism school. He needs a break. It doesn’t help that, in his boredom, he’s fallen into a risky relationship with the publisher’s teenage daughter. He could more usefully spend his empty hours working on the novel he started while still an undergrad. But that would require more energy than he seems to have these days.

Such are the ingredients for “A Plot for Pridemore,” a first novel by Stephen Roth, who’s done his time as a reporter covering small-town life and politics. And as you might expect, Roth deftly combines these ingredients into a story that’s as rich in humor as it is in insight.

Of course, nothing goes quite as planned. Digby Willers does get trapped in the cave, a media circus does ensue, and Pete Schaefer gets a big story, plus a lot more than he bargained for. But a lot goes wrong, some of it very wrong.

Roth’s tale is spiced with exaggeration and wacky characters, both in Pridemore and among the media horde that descends as the drama builds. But the novel is more dry humor than slapstick, in the fine tradition of Southern (yes, we’ll count rural Missouri as Southern) comic novels that includes such writers as Clyde Edgerton and James Wilcox.

Blessed with a good reporter’s skepticism, verging on cynicism, Roth obviously knows how old-boy networks and backroom deals work. Reporters who cover places like Pridemore are given to saying things like: “I oughta write a novel, but nobody would believe this kind of thing. You can’t make this sort of stuff up.”

Roth did write a novel, using his hard-won insights to make up some pretty outrageous “stuff.” The result is a story that’s delightfully funny and surprisingly true.

This entry was posted in Southern Fiction and tagged A Plot for Pridemore, comic fiction, Missouri, novels, Stephen Roth. Bookmark the permalink.

1 Response to Wacky and oh, so true