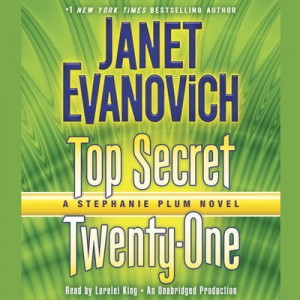 How many wacky adventures can Stephanie Plum get into? How many cars can be destroyed? How often can her apartment be trashed? How long will her relationship with Joe Morelli survive her continued attraction to Ranger?

Infinitely, apparently. Janet Evanovich manages to keep this delightful series fresh, book after book. And not only fresh, but better and better. Top Secret Twenty-One is, if anything, more entertaining than the books that preceded it.

If you thought nothing could top Kevin, the 7-foot-tall giraffe galloping around a neighborhood in Trenton, N.J., in Takedown Twenty, you underestimated Evanovich’s zany imagination. Try a pack of feral Chihuahuas, alternately shivering in terror and attacking ferociously.

Stephanie Plum, for anyone who might not know, is a bounty hunter who nabs people who jump the bail provided for them by her cousin, Vinnie. Some of her cases start out sounding as if they’ll be pretty routine, but there are always surprises, some of them involving the possibility of serious bodily harm. In her spare time, to pick up a little extra cash and because he’s a good friend, she helps out Ranger, the sexy and mysterious owner of a security firm that seems awfully secret and high level. Those expeditions also thrust her into dangerous situations, and that’s only one of the reasons they bother Stephanie’s more-or-less regular boyfriend, Morelli, who is a homicide cop.

This time, Stephanie is looking for Jimmy Poletti, a big-time used-car salesman who jumped bail after he was arrested when it turned out he was dealing a lot more than cars.  She’s having a little trouble catching Poletti, and it doesn’t help that people associated with him keep turning up dead. Then there’s the problem of Randy Briggs, an obnoxious 3-foot-tall former hospital security guard who’d been keeping the books for Poletti and therefore knows way too much. Briggs turns to Stephanie for protection after his apartment is hit by a rocket, and she’s too softhearted to turn him down.

Meanwhile, somebody is seriously trying to kill Ranger in a particularly nasty way, and Stephanie tries to help him figure out who has it in for him and why.

All this gets complicated by the Chihuahua pack, not to mention the feud between Stephanie’s Grandma Mazur (who develops a very interesting bucket list) and Morelli’s evil-eyed Grandma Bella.

One of the amazing things about all this is that Stephanie, despite the zaniness and danger of her life, remains a more or less normal, unassuming young woman. She wears jeans and T-shirts, takes care of her pet hamster, visits her parents and grandma frequently, tries to be true to Morelli and has no super powers whatsoever. She hates guns and is a terrible shot if forced to use one.

Did I mention Lula? A former “ho,” Lula is Stephanie’s sidekick, which only adds to the craziness.

The only fault I can find with this book is that it had to end.