Paul O’Connor once again has put his driving time to good use, this time listening to a troubling book about how the U.S. put Nazi scientists to work in this country after Hitler’s defeat. 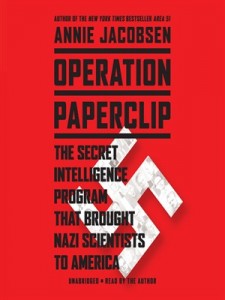 The passage of time allows us to see very difficult choices from the past with a clarity that was missing in their moment.

Today, Americans are embarrassed that their country, fresh from the Greatest Generation’s contribution to the defeat of Nazi Germany, recruited some of Hitler’s most ruthless scientists to come to the United States, work for the country that had defeated them and gain the rights and privileges of American citizens.

But in late 1944, and the years immediately following, the decision to recruit those scientists and use their expertise for U.S. national defense was not so obvious as wrong. The Allies first faced the possibility that developing Nazi war technology could, in the very latest days of the war, either swing the flow of battle back to German advantage or, somehow, be transferred to the Japanese to prolong the Pacific war.

Then, after the war ended, it became clear that the Soviets, who were quickly emerging as America’s newest enemy, were themselves recruiting Nazi scientists and employing them in the search for new weapons to potentially use against the West.

Annie Jacobsen does a good job of providing historical perspective to the situation that American military and intelligence officials faced at the time.  The Cold War was under way, she explains, the Soviets were perceived as a very credible threat to the West, and there were horrible implications imaginable should the best German scientists land on the wrong side of the Iron Curtain.

It is only in the latter chapters that, equipped with hindsight’s clear vision, she judges. It is appropriate that she does.

She concludes that the U.S. erred in two key areas of intelligence. The first was in its knowledge of the Nazis who were being admitted to the U.S. – or in a few cases, being employed by the U.S. in Europe. Much that should have been known about these people was either unknown in the 1940s or was deliberately overlooked. These were not the Good Germans we often hear about.

Many were monsters. Some conducted or oversaw scientific experiments on human beings, often killing the test subjects in the process. Others employed slave labor, often working the slaves to death. Others were involved in research and development aimed at chemical and biological weapons.

Her work is exhaustive and, quite frankly, exhausting. Had I been reading this book at home, I’m sure it would have taken me months to finish. The detail and minutiae would have worn me down. But, it was in the CD player of my car as I drove from Raleigh to Denver, and when my mind wandered, I was always able to refocus, even if I’d missed something.

This is a work, however, that most readers of history would prefer in book form if for no other reason than to be able to use the index to refresh memories of the many characters. I say this despite the author’s credible job of reading the work.

Are there more entertaining ways of passing the time on a cross-country trip? A fictional thriller might have been a better choice on my part. But, having endured the bad news that this book provides about my country’s leaders in the postwar years, I’m glad I listened.