Victorian London, with its veneer of manners and morals and its dark realities of poverty and crime, is often depicted in fiction. In this first novel by a young English woman, the dark side of Victorian London is even darker – and more terrifying – than usual. 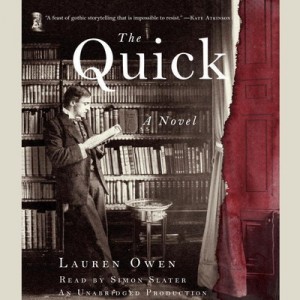 This book is as full of twists, turns and dangers as a back alley in a poor section of 1890s London. The biggest shock of all comes fairly early, and it shouldn’t count as a spoiler to reveal that the gentlemen with pale countenances and the occasional spot of blood on the collar – as if from a shaving mishap, but not quite – turn out to be vampires. Even though the word vampire is almost never used in the book.

Lauren Owen writes well, and Simon Slater reads the audio version of her novel exceptionally well, so the early chapters intrigued me. We see the girl Charlotte Norbury and her younger brother, James, spending their lonely, eccentric childhood on a country estate that’s fallen on hard times. Then James goes off to Oxford while Charlotte remains in the country with an elderly relative, because that’s how things go for young men and young women of a certain class in England.

After Oxford, James, trying to succeed as a poet, stumbles into sharing lodgings with another young man, a younger son who has more charm than ambition or principles. Eventually, James falls into an inconvenient romantic attachment that begins to consume him. Then, as far as Charlotte knows, he disappears.

Despite knowing nothing about how to get on in the world beyond her home, much less in the crowded, bustling streets of London, Charlotte sets out to find her brother.

When I realized that Owens’ tale involved the “undead” (or “undid,” as some of the less sophisticated characters call themselves), as differentiated from the “quick,” I briefly thought about giving up on the novel. I don’t usually read vampire tales. But the story thus far had been engrossing, and Slater’s dramatization of it had lured me in. I kept listening, ever more fascinated and entertained in a sometimes-ghoulish way.

Charlotte stumbles into an alliance with a young American man who has run afoul of one group of the undead: the exclusive, mysterious Aegolius Club. Together, they become involved with a couple of unlikely vigilantes who are determined to fight the bloodthirsty monsters who roam London disguised as normal humans, looking for prey.

There’s another prominent group of the undead, of a social class much lower than that of the Aegolius Club, and including a number of street urchins destined to be bloodthirsty children as long as they survive.

As Charlotte desperately looks for James; as the Club members look for James, Charlotte and Charlotte’s American companion; and as all the undead look for the blood they need to keep going, the uneasy rivalry between the two main groups of London vampires (dare I say that word?) seems destined to become a veritable war.

Owen tells all this in a convoluted way, moving back and forth in time and shifting from one viewpoint to another, sometimes recounting the same events through different perspectives. As a result, the reader (listener) begins to share some of the feelings of bewilderment, anxiety and even horror that plague Charlotte and her fellow “quick.”

A reader could look for metaphors about the dark side of Victorian society in this gory tale. A reader could, as I did before deciding to suspend disbelief, wonder if other Londoners might not notice that certain prominent “people” seem never to age or perish.

Or a reader might just, as I eventually did, get caught up in this unusual, well-told tale and enjoy it.