Not your typical sailor

Geoff Dyer is an eccentric, irreverent, funny, peripatetic, brilliant, Oxford-educated British writer of fiction and nonfiction, bending the “rules” in both genres. He’s in his 50s, fond of his creature comforts, resistant to change and an atheist.  He’s unusually tall and physically unfit. Despite his tales of having been fascinated by World War II stories and model planes as a lad, he’s about as un-military as a person can be. 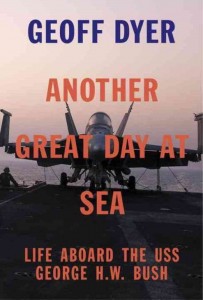 So he might seem a terrible choice to be placed on the USS George H.W. Bush, one of the largest aircraft carriers in the world, for a two-week visiting-writer gig. But in 2011, toward the end of the mammoth ship’s first deployment, Dyer landed on board the Bush in the Arabian Gulf. He’d been offered a part in a new writer-in-residence program, and, with a world of choices open to him, he’d asked for the carrier. Now his book about the experience is generating a good bit of attention, positive and negative.

I’ll say right off that although I approached this book a tad suspiciously, I’m firmly in the camp that’s giving it two thumbs up. I’ll also say that although I both listened to and read (more about that later) the book, I think the audio version is a good choice because the reader, Jonathan Cowley, has just the right British accent to help Americans appreciate Dyer’s sense of humor.

I had a particular interest in this book because my younger son is a U.S. Navy lieutenant (junior grade) assigned as the navigator of the USS Truxtun, one of the destroyers that deploy in a group with the Bush. As I write, those two ships and about half a dozen others are in the Arabian Gulf near Iraq, which is in a state of dangerous turmoil. (The Navy has released information about their presence there, so I am not violating any operational security rules.) I’ve seen the Bush (it’s bigger in both area and population than my hometown) several times at its home base in Norfolk, Va. (which is, by the way, the largest naval base in the world), including on the rainy, dreary day in February of this year when it and the Truxtun sailed away on deployment to the Mediterranean, the Red Sea, the Arabian Sea, the Arabian Gulf and wherever else events might dictate.

Also, in a much more limited way, I, too, have been a largely uninformed civilian visitor aboard a Navy warship. When the ship my son was previously assigned to, the USS Mesa Verde, returned from an 11-month deployment in February 2012, my husband and I spent two nights and three days aboard as part of the Tiger Cruise for families. Dyer is right on when he describes feeling as though he’d been dropped into an alien, gray, metal, greasy, noisy universe filled with steep ladders, heavy doors, confusing passageways and very busy people.

If you want a book that details the operations of an aircraft carrier and gives you facts, figures and the official “gouge,” you need to look somewhere else. Dyer even pays his respects to a couple of other books more along those lines. That sort of reporting is not what he does, as anyone who’s read his other books or magazine articles (I had not) would know.

As more than one reviewer has said, this book in some ways is as much about Dyer as it is about life aboard the Bush. (So it’s only fair that this review is turning out to be about me as well as about Dyer’s book.)  He writes not just about what he observed aboard the Bush, but about how he reacted to what was there – his emotions, his prejudices, his petty complaints, his sometimes lame jokes and his hyperactive mind that jumps hither and yon and circles back in a zany way.

And, as some critics have fairly pointed out, Dyer did several things that ensured that he did not experience as fully as he might have what life aboard the Bush is really like. He felt like a conspicuous outsider the whole time, and not just because he was a civilian and possibly the tallest and the oldest person on board.

First, he refused to share sleeping quarters, wangling his way into the ship’s small single room usually reserved for dignitaries. He had been offered a berth in a room for six, sharing with the photographer who accompanied him, the ensign who was assigned to babysit him, and three other junior officers. A room for six, of course, is luxury compared to enlisted berthing, which might have a couple of hundred people sleeping in close quarters. But Dyer was horrified at the prospect.

Appalled by the food on board, he managed to interview the captain’s chef and then regularly got leftovers from the delicious meals she prepared.

During a man-overboard alert one night, Dyer was told just to stay in his quarters – and he did. You get the picture.

And although he had done a fair amount of preparing for his visit, he was woefully ignorant about life aboard an underway U.S. Navy warship. He was disappointed that there was neither Ping-Pong nor badminton, not to mention no bars, no wine at the table and, in fact, no alcohol. How, he wondered, could people linger, relax and chat without alcoholic beverages to loosen things up?

But Dyer’s unabashed ignorance of most things Navy, and his perspective as a coddled, rather effete Brit are part of what made the book rewarding for me. He looks at the U.S. Navy, this ship and the people on board from the point of view of a curious, thoughtful outsider. He is one of the “others” who, as Robert Burns put it, can see ourselves in a way that we cannot. That perspective is in many ways more enlightening and refreshing than the view from an American with more background in naval matters would have been. Dyer also thinks about the meaning of what he observes in a different way than someone who’s more familiar with the Navy would have done.

None of this is to say that Dyer didn’t gather a lot of information while aboard the Bush. With his ensign escort (whom he readily accepted because he realized he would have become lost and probably injured on his own), he visited many areas of what is essentially a city afloat, and interviewed a variety of people, enlisted and officers. He listened to people’s stories, learning a lot about why various ones joined the Navy – whether out of patriotism, a desire to get their lives back on track, or a means to get an education – and what their service means to them.

He makes no bones about his prejudices. An atheist and a liberal, he was rather appalled by the Bible study session he attended one evening, and by the politically and religiously conservative comments of a lieutenant commander who was about to retire from the Navy to help home-school his young children.

And yet, almost in spite of himself, Dyer finds himself honestly moved by many of his experiences on board: a steel-beach “picnic” on the flight deck, a promotion ceremony, awards. He’s impressed not only by how hard and efficiently everybody seems to be working, but also by how working hard and doing a job well, even under difficult circumstances, gives them a sense of purpose and even joy. He marvels at how these thousands of people in close quarters, male and female, most of them quite young, work professionally and politely together.

He is in awe of the U.S. Navy and its role –a major force where history is being made, at “the tip of the spear.” And he reflects upon the American-ness of it all: the optimism, the self-assurance, the conviction that things can get even better.

At first, he is bemused by the nightly prayer on the ship’s loudspeaker. An atheist, he never prays, believing, he says, that there is no one or nothing to pray to. But by book’s end, having departed the carrier for Bahrain, having had a long shower, a proper restaurant meal and one cold beer – which he surprised himself by finding was all he wanted – Dyer lay in his luxurious hotel bed and found himself praying “for those who go to the sea in ships.”

How much did I like this book? I began listening to a review copy of the audio version only to find, 20-some chapters in, that I had managed to download it with several chapters missing. So I immediately bought the iBook version to fill in the gap. Then I bought a print copy to include in the next care package I send to my son who’s on a destroyer accompanying the Bush.