It should come as no surprise to me or anyone else that John Sandford’s novels are very good. After all, everything he writes lands at the top of the bestseller lists. He brings the writing and investigative skills of a Pulitzer Prize-winning journalist to his fiction, with good result. He’s a person with wide-ranging interests and experience.  And the Minnesota setting is a refreshing change from ordinary fare. 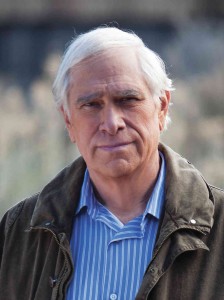 Nonetheless, I had never read any of his books until I came across an audio version of one. I was in between books for listening, so I thought I’d give it a try. As I’ve written before, I’m inclined to try books in the audio form that I wouldn’t sit down and read in print. The reason I hadn’t tried a Sandford novel in print is that I like some police detective/thriller books, but I find many of them longer on violence, gore and misogyny than on plotting and character development.. Sandford’s, I now see, do not fall into that category.

Having now listened to at least a couple of books in each of Sandford’s two series involving agents of Minnesota’s Bureau of Criminal Apprehension, I am eager for new ones. I’d also love to listen to (or even read in print; they are that good) the earlier ones in the series. Sandford does allow his characters to go through life changes, such as marriages and new jobs, but a reader can pick up the series at any point without feeling at a loss. It’s like making new friends, accepting them for the relationships you have, and gradually learning more about their backgrounds.

If you listen to audiobooks while traveling with others, Sandford’s books may be good candidates. At the risk of indulging in stereotype, I would venture that some books women like are too “girly” for men. And some books in the thriller/detective genre would not find favor with a lot of women. But fans of intelligent, well-plotted and suspenseful fiction with interesting characters ought to be able to agree on John Sandford’s books. (That’s not to say these are good books for listening with the kids in the car. Things can get pretty graphic.)

Here are brief looks at three of Sandford’s latest audiobooks. 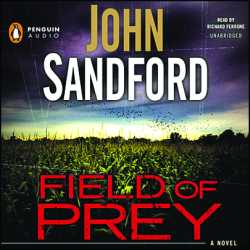 This is the 24th in Sandford’s “Prey” novels starring Lucas Davenport. Earlier in his career, new readers of the series learn, Davenport was an unusual but effective officer for the Minneapolis Police Department. For some time now, however, he’s worked for the state Bureau of Criminal Apprehension, handling some of its most sensitive cases.

This time, he’s called in to help out when after the shocking discovery that a serial killer has been at work in the Red Wing area. A couple of teenage lovers stumble onto a smelly cistern on an abandoned farm, which turns out to be filled with the remains of young women. As the body count mounts well into the teens, evidence suggests that the killings took place over a number of years.

Besides the horrifying thought that a killer apparently has getting away with murders for a long time, the sensational discovery brings unwanted publicity to Minnesota and pressure on Davenport’s boss.  Not wanting to deal with the bureaucratic challenges of orchestrating a massive investigation, Davenport stays on the fringes at first. But when the killer becomes a threat to the investigators, he moves into high gear. The killer, he realizes, must be someone who lives in one of the area’s small towns, right in plain sight.

The plotting is deft, as Sandford not only tells us what Davenport is doing and thinking, but also what’s going on with the killer. We are also able to see minor clues that Davenport and the other investigators don’t quite grasp, a device that heightens the tension.  But as the story progresses, the reader, too, is in for some surprises.

What’s the audiobook equivalent of a “page turner”? Maybe a “gas burner,” as those who listen to this one while driving are likely to go a few extra miles if they reach their destination while the tale is still unfolding. 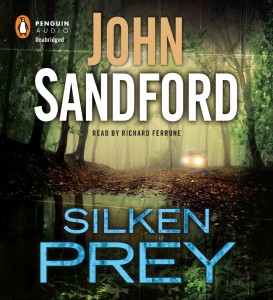 One of the great things John Sandford brings to his novels is infinite variety. In No. 23 of the Lucas Davenport “Prey” series, he plunges into the cutthroat world of politics.

The investigation takes him, of course, into the campaign of the senator’s challenger, a wealthy, beautiful and ambitious woman named Taryn Grant.

What results is a fascinating and sometimes horrifying look into the behind-the-scenes world of high-level politics. This is another tightly plotted book, with fascinating characters and plenty of intrigue and action – not to mention more than a little satire and dry humor aimed at politicians and their hangers-on. 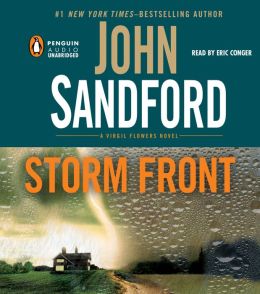 A few years ago, John Sandford gave Virgil Flowers a series of his own. Flowers works for Lucas Davenport in the Minnesota BCA, and the two often figure at least a bit in each other’s novels.  The interaction can be entertaining, partly because they are very different men. While Davenport is independently wealthy and a family man with a wife who’s a surgeon and young children (as well as an adopted teenage daughter), Virgil is a cowboy with longish blond air, boots and a string of ex-wives. A Lutheran minister’s son, he loves fishing and women. He’s a good detective in terms of results, but definitely unorthodox in his methods.

In Storm Front, Virgil Flowers finds himself wondering if he’s been dropped into a movie like the ones based on Dan Brown books or featuring Indiana Jones.

A rare and valuable relic, just unearthed at an archaeological dig, has been smuggled out of Israel. And the apparent culprit is a terminally ill Minnesota man who may have brought it home. Davenport assigns Flowers to meet with the Israeli investigator who’s coming to Minnesota in hopes of retrieving the stone.

Of course, it’s not that simple. The stone fragment turns out to have major political implications for the Middle East, and the man who stole it, though in poor health, is crafty and determined.

Flowers soon finds himself in a wild investigation involving several bad guys and gals, apparently including the Mossad, Hamas, Syrians, a Texan, a TV star and the lovely matriarch of a local family of two-bit criminals. Oh, and some of the people involved have weapons, and don’t hesitate to use them.

This book is a lively adventure, and also delightfully funny.