Three years ago, I reviewed (favorably) Colin Cotterill’s first Jimm Juree mystery, set in Southern Thailand. Somehow, the second entry in the series (with the intriguing title of Grandad, There’s a Head on the Beach) slipped by me, but I’ll be looking for it. I’ve just read third book about the intrepid Jimm, and it’s, if anything, quirkier than No. 1. 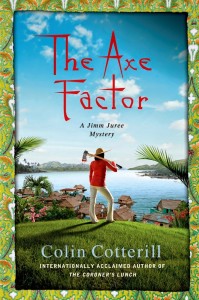 Jimm Juree’s budding career as a journalist – crime reporter, to be precise – in the Thai city of Chiang Mai was cut short when her mother, eccentric on her best days, sold everything the family had to buy a rundown resort in a remote fishing area. Jimm’s family, although (or, perhaps, because?) it is wildly dysfunctional, is very close, and everyone but Jimm’s sister Sissi (formerly a man), whose business demands good Internet access, dutifully moves and pitches in to run the resort. Everybody includes, besides Jimm and her mother, Mair, her grandfather, who is a former policeman; and her brother, Arny, a body-builder who’s in a relationship with a much older woman. And it turns out that Mair dragged the family to the edge of nowhere in hopes of reuniting with the father who abandoned the children when Jimm was a toddler – Captain Kow, of squid boat fame.

In other words, these books are murder mysteries, but mysteries heavily laced with wit and satire.

This time, Jimm, who in addition to helping run the money-losing resort, picks up extra money by correcting the often hilariously incorrect translations of Thai into English, is thrilled to get a juicy free-lance writing assignment. Conrad Coralbank, a famous author of crime novel who’s originally from England, is living with his Thai wife in a mansion near the resort. Jimm is dispatched to interview the great writer.

One of the first things she discovers, however, is that the author’s Thai wife has disappeared in what seem to be mysterious circumstances. About the same time, the local doctor, a woman, also has disappeared, and, urged on by the doctor’s nurse, Jimm does a little detective work.

Oh, and some unpublished blog entries dropped into the narrative every now and then suggest that there may be a crazed serial killer on the loose.

Jimm’s life gets much more interesting when Conrad Coralbank, now intriguingly available, begins pursuing her. Despite mysterious warnings from someone, Jimm is more than eager to be pursued romantically. It’s been a long time.

Further complicating things, Mair heads off to meet Captain Kow, and a major storm is bearing down on the fragile coastal area.

What has happened to the missing women? What are Conrad Coralbank’s real intentions toward Jimm? Can Granddad Jah and his buddies save the day? These and other questions propel the book toward a bloody climax and the revealing of more than one mystery.

With the addition of Conrad Coralbank, whose background and initials bear an obvious resemblance to his own, Colin Cotterill has taken the series to a new level. He’s poking fun at himself as well as at his characters and society in general.

As the title might suggest, however, with axes involved, this book does have some blood and gore. The mystery turns out to involve some serious corruption. And Jimm, who after all is a grown woman who was once, briefly, married, is no Girl Scout when dealing with Conrad Coralbank.

Not everyone could combine such improbable comedy with a credible and well-plotted mystery, but Cotterill pulls it off admirably. This is a great book to take along on vacation.