In my mind, one of the great values of audio books is that I’ll try something that I wouldn’t normally sit down and read in the print version. Although I’ve abandoned audio books that were really bad or just not interesting to me, I’m more likely to give something I think I might not much like a fair shot if a good reader is presenting it aloud than if I’m turning the pages. With this book, I got a pleasant surprise. 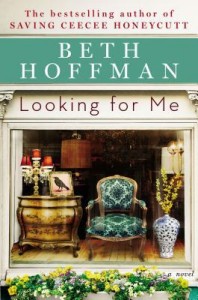 Sometimes, it’s nice to be wrong. Judging from the cover and its brief description, I thought Beth Hoffman’s second novel, Looking for Me, was a lightweight “girls’” novel – you know, the superficial, predictable kind of story that’s mostly about gal pals and looking for guys. That was OK for a book to listen to; I’d been reading some pretty heavy fiction dealing with wars, murders and other violence, so I thought I was due for a relatively mindless break.

Instead, I quickly found myself pulled into a compelling story, beautifully written, with surprising insights.

Teddi Overman tells the story in a deceptively simple, endearing voice. She’s into her late 30s by now, and though she still has some of the wide-eyed wonder of a Kentucky farm girl about her, she also has admirable maturity and strength. Though Teddi, by her own account, has at times been impulsive, stubborn and emotional, she knows herself pretty well. She’s an essentially goodhearted and intelligent person who benefits from the lessons life offers.

Teddi has a soft heart for nature and animals, having grown up on a farm on the edge of Kentucky’s Red River Gorge. She’s especially close to her brother, Josh, who’s several years younger.  And when, as a young girl, she rescued a castoff chair from a roadside ditch and restored its beauty, she found her life’s calling.

Despite her mother’s determination that Teddi learn typing and other “useful” skills, Teddi left home in the middle of the night not long after high-school graduation to pursue her dream of having her own business restoring and selling antiques.

She winds up in Charleston, S.C., where through hard work and determination, she eventually does own her own shop. Though her mother is hurt and frustrated by Teddi’s choices, the family ties are strong, and Teddi visits the Kentucky farm whenever she can. It’s on one Thanksgiving weekend visit that everything changes, partly because of a series of events Teddi herself inadvertently sparked. Josh disappears into the wilderness, and the family will never really recover.

After Teddi’s father dies of an illness, the family is reduced to the uneasy relationship of Teddi and her mother. Though Teddi makes a life for herself in Charleston, the mystery of what happened to Josh, and whether he could possibly still be alive, is a constant shadow over her life.

And then there’s Kentucky. The family farm is on the edge of a vast wilderness, full of rugged canyons and secret caves. Tourists, development and poachers threaten the forests and the creatures that live there. Hoffman seems to know her birds and wildlife as thoroughly as she knows her antiques.

Josh had been an unusual boy with an almost mystical connection to and understanding of birds and animals. For years, Teddi stubbornly refuses to believe he’s dead. And then developments suggest that he really might be alive.

Hoffman develops the plot and her characters, especially Teddi, so that what happens is convincing.  Over the years, Teddi learns a great deal about the hold that family and home can have on us, but also a lot about how we can choose to make our own way in the world.

This novel is worthwhile as well as entertaining, whether you want something to read on vacation or a story to listen to while you’re driving to your destination. The reader on the audio version, Jenna Lamia, does an excellent job with all the characters, and especially with Teddi, who comes across as genuine and likable. She is particularly good with the different accents – Kentucky Southern is not the same as Charleston Southern.

A novel for women? Yes, for women who like strong characters with whom they can identify, and fiction with people, places and ideas that will stay with them long after a book’s end.

3 Responses to Those binding ties