As frequent readers of this blog know, I’ve long been intrigued by the World War I era in England – the war itself and the aftermath, the effects of the war. So many men were killed, and so many others were maimed in body or spirit or both. And the war profoundly changed British society. So much that had seemed constant, immutable, was gone or so altered as to be almost unrecognizable. Across the class spectrum, people were trying to find their place in the new order and make sense of their world.

I’ve read quite a bit of fiction set during this bewildering time in England, including both series of novels by Charles Todd.

So I was eager to listen to this new novel by Anna Hope when the audio version arrived at my house. 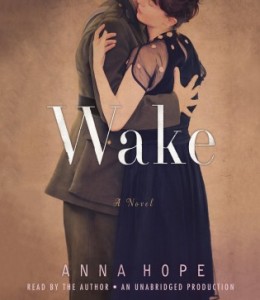 It is 1920, and in London, preparations are in high gear for the two-year anniversary celebration of Armistice Day, the day England and her allies “won” the war we now call World War I.  A highlight of the commemoration will be the burial of the Unknown Warrior, an unidentified soldier brought home from a makeshift grave in France to represent all the others whose remains weren’t brought home.

Anna Hope chose the title of this moving novel with great care. “Wake” is a simple word, but one with multiple meanings, many of which apply to the story she tells. To wake, of course, is to come to consciousness after sleeping, and by extension, also to become aware of something. A wake, like the trail a boat makes as it disturbs the water, is the aftermath of a dramatic event. And a wake is keeping watch over someone who has died.

Rather, I should say these meanings of the word “wake” apply to the stories, plural, that Hope tells. Her relatively brief novel is as deceptively simple as the title she has given it, and like the title, the book is richly layered.

Rather than write in sweeping terms about the war and what was happening as England limped into the new era, Hope focuses intimately on a few characters over just five days. Chief among these characters are three very different women:

Hettie is young and weary of war. She lives at home with her mother and her brother, who came home from the front as a broken man. Hettie works at a dance hall where men bid on their dance partners, and where she hopes to meet her future husband. She has little patience for her brother’s inability to get a job and get on with his life, and she isn’t thrilled when the veterans with limps and artificial limbs want to dance with her.

Evelyn, the daughter of an upper-class family, cannot get over the loss in the war of the man she loved. She throws herself into her work at the pensions service, where she deals with an unending stream of unemployed, desperate men hoping for benefits to help them cope with broken bodies or psychological damage. She cannot understand why the brother she once idolized has been so different since he returned from his duties as an officer in the war.

Ada is haunted by the loss of her son in the war, a loss made worse by the fact that she never was told the circumstances of his death. In fact, she lets herself believe that he must still be alive. Her husband, who has tried to make his own peace with the loss of their son, is growing more impatient than sympathetic with her distress as time wears on.

The book moves among the stories of these women as well as those of some of the men who touch their lives. The frequent shifts of time, place and setting might have been difficult to follow in an audio book, but Hope has done her work well. Also an actress, she ably reads the book herself.

Gradually, in a way that does not seem improbably or contrived, Hope develops the connections that bind these three women who ostensibly are strangers. By the time the Unknown Warrior is interred, the women’s stories have moved forward. Hope does not try to wrap everything neatly into happy endings, because happy endings are not that easy in the aftermath of a terrible war. But, as she shows with touching sensitivity, there can be some awakenings.