What’s next for Flavia?

Once again, I treated myself to double enjoyment of Alan Bradley’s latest Flavia de Luce novel. I read the book as soon as it arrived, because I couldn’t wait. And then when I got the audio version, I listened, because the stories are just that good, and because I love British accents and can’t do them properly in my head when I read.  Jayne Entwistle, who reads the Flavia de Luce books, is a brilliant performer. 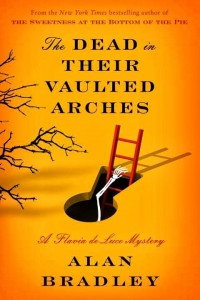 I guess we all knew some things would eventually have to change in Alan Bradley’s delightful series about Flavia de Luce, the precocious English girl who amuses herself by dabbling in chemistry and solving murders. After all, Flavia can’t stay 11 forever, and how many murders can there reasonably be in one English village in 1950?

But in this, the sixth book in the series, Bradley changes so much that it made me downright uneasy. Then I remembered the Harry Potter series, and how J.K. Rowling let Harry grow up and the books grow darker as the story unfolded.

One of the most endearing things about Flavia has been her innocence. Despite her great intellect, she’s a child who’s been both sheltered and neglected. She knows more about chemistry than she does about life. That’s why her voice is so endearing, and why Bradley can make readers believe that Flavia might really still think, for example, that there might be some truth to the Santa Claus story.

This book is apparently a transition to a new phase in Flavia’s life, and even a change of primary setting from Buckshaw, the crumbling mansion where she’s always lived with her father and two older sisters, all attended by Mrs. Mullet, the housekeeper, and Dogger, who served with her father in the war and now takes care of many things. Flavia has spent much of her time either in her chemistry lab or off on Gladys, her mother’s old bicycle, nosing into something in the village or countryside. Now she will have new experiences and new terrain to explore.

Readers who have not been following Flavia from the beginning of the series probably would not enjoy meeting her first in this book. The Dead in Their Vaulted Arches is too much a culmination, an end, in a way to Flavia’s childhood.

The defining factor in Flavia’s life has always been that when she was a baby, her mother, Harriet, disappeared in mysterious circumstances. She has always felt lonely, living with her father who is nearly paralyzed by grief, and her sisters, who remember her mother, while she does not. Now Harriet’s body has been found and sent home to Buckshaw for burial.

As the family stands at the railway station awaiting the arrival of Harriet’s body, a tall man approaches Flavia and whispers an enigmatic message. Within moments, he is dead, apparently pushed under the train. In her grief over her mother, Flavia uncharacteristically almost forgets this apparent murder, but before long she’s trying to unravel that mystery and the greater ones to which it leads. Apparently, there is much to know about Harriet and other members of the de Luce family.

As people come from near and far to pay their respects to Harriet, Flavia finds herself dealing with Winston Churchill and the Home Office, and taking to the skies in Harriet’s Gipsy Moth airplane.

By book’s end, Flavia is about to head away from Buckshaw and to the next chapter in her life.  She’s turning 12, and she knows a good deal more now about her family’s legacy and her role in it. Flavia will have to make some major adjustments, and so will Alan Bradley. Here’s hoping Flavia doesn’t grow up too fast, and that the next book in the series will be worthy of those that came before, those that made us such fans.