Stephanie Plum, in hot pursuit of a giraffe in New Jersey?

If you want to listen to a thoroughly entertaining audio book, it’s hard to beat the combination of a Janet Evanovich Stephanie Plum tale read by Lorelei King. 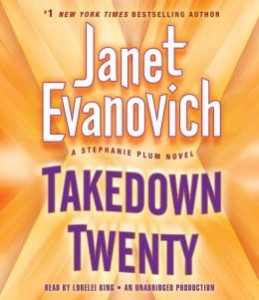 Stephanie Plum must be the most lovable bounty hunter in the history of bounty hunters. She makes her living nabbing criminals in Trenton, N.J., who have jumped the bail extended to them by her cousin Vinnie. But she’s an accident-prone klutz who rarely brandishes more of a weapon than a stun gun, and the bail-jumpers have a pretty good chance of getting the better of her.

Far from being a hard-boiled tough gal, Stephanie is an endearing young woman plagued by guilt because of her confused feelings for the two men in her life, the policeman Joe Morelli, who might be good marriage material, and the man-of-few-words security-expert Ranger, who definitely is not. So, most evenings, she’s likely to find herself at home in her sparse apartment with only her hamster, Rex, for company. That is, if she’s not dropping by her parents’ house to do laundry or get some home-cooked food, or accompanying her grandma to a viewing at a local funeral home –a favorite pastime of the older set.

As she tries to make a living, Stephanie invariably finds herself involved in all sorts of outrageous, usually dangerous and reliably hilarious adventures.

This time out, she really needs money (as usual), so she’s trying to capture a powerful mobster, Uncle Sunny, who also happens to be the godfather (really) of her almost-fiancé, Morelli. All sorts of people are conspiring to keep Stephanie from nabbing Uncle Sunny, including Morelli’s Grandma Bella, who’s already given Stephanie the Evil Eye, and various mob hit men.

On the side, Stephanie’s trying to help Ranger figure out who’s been killing elderly women and stashing their bodies in dumpsters. That quest takes her to bingo parlors as well as the familiar funeral parlors.

As Stephanie tries to nab criminals and solve murders, bullets fly, cars are wrecked and stolen, and a giraffe named Kevin careers through a Trenton neighborhood. Lula, the irrepressible former “ho” who’s Stephanie’s sidekick, is especially fond of Kevin.

Half the fun of these tales comes from the supporting cast surrounding Stephanie, and Lorelei King is brilliant as she brings them all to life.