A history all Americans should read

Paul O’Connor has used the wintry weather as a good time to catch up on a book he missed when it was first published, to considerable acclaim. He’s so impressed he wants to spread the word. 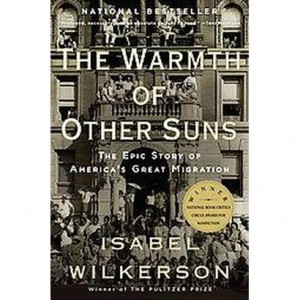 When World War I began in Europe in 1914, the mass European migration to North America halted just as Northern and Western industry needed low-cost labor to supply the Allied war effort.

American industry found another source of tired and poor huddled masses, people yearning to be free. They were black Americans, imprisoned by Jim Crow in the nation’s South.

Much has been written already about Isabel Wilkerson’s spectacular 2010 history of the great migration of American blacks from the South to the North and West. It began in 1915, with the need for labor in the nation’s industrial heartland, and ended in 1970.

The book deserves every bit of praise it has received. Wilkerson, a Pulitzer Prize winning newspaper reporter who also won numerous awards for this work, interviewed more than 1,000 people in connection with her book but tells the story through only three: a woman who left Mississippi in 1937 and went to Chicago, a man who left Florida one step ahead of vigilantes in 1945 and settled in New York, and another man who left Louisiana for college in Atlanta and then, after a few other steps, became a prominent physician in Los Angeles.

Wilkerson writes warmly and fluidly. Her prose is as good as that of a first-rate novelist, and so is her character development. By page 538, we feel as if we are intimate friends with three incredible humans, their virtues and vices exquisitely displayed to us.

Here at Briar Patch Books, we sometimes review older books even if they were heavily reviewed elsewhere, as this book was. We can only hope that a few of our regular readers will find a great read that they overlooked.

This is a book all Americans should read, but especially those who live in the South but who were not here before life changed for the better. It tells a remarkable tale that will challenge our faith in our own nation’s history.

We all know that Jim Crow limited opportunity for black Americans, and that during the Civil Rights Era violence was committed against those who challenged that law. But that is a benign view of Jim Crow; it fails to tell the story of an utter lawlessness controlling Southern blacks, of the white capriciousness under which blacks lived, never knowing when either vigilantes, hooligans or law enforcement would arrive to strip them of their lives, liberty or property without recourse to any fair process.

When conservatives yearn for a fairyland time when government was smaller and less intrusive, they overlook the days of Jim Crow, when millions of Americans were held in servitude and fifth-class residency with the full complicity of the government. Yes, small government might have existed when it came to business regulation, but to African Americans in the Jim Crow era, the sheriff was big government who might arrest them on a Saturday because they chose not to pick cotton that day, and it was big government that, when vigilantes did not do so first, enforced the prohibitions against sitting in a clean section of a movie theater.

George Starling, who left Florida in 1945 and then worked as a porter on trains that traveled the length of the East Coast, described these journeys to Wilkerson in ways that evoke my memory of a train trip from Vienna to West Berlin in 1972, from free society to totalitarian state and back into freedom.

Wilkerson is no apologist for the North here. Her three characters, and the approximately 6 million others who emigrated from the South, encountered racism and prejudice in their new homes. But as bad as life before 1965 might have been for blacks in Chicago or Harlem or Los Angeles, it was still better than life in Jim Crow Dixie.

The Great Migration of the 20th century changed America, and it changed the world. Wilkerson’s book is a moving way to learn about it.