Inspector Rutledge in the misty fens

Even though I’ve followed Charles Todd from the time “his” first Inspector Ian Rutledge mystery appeared in 1996, I find it hard to believe that this latest is the 16th in that series. The mother-son team that writes under the name Charles Todd manages to keep each new book fresh and intriguing, while slowly allowing some changes in the brooding Rutledge, who’s struggling with PTSD from his days as a British officer in World War I.

These books, and those in the other Charles Todd series, featuring Bess Crawford, a battlefield nurse in World War I, are especially interesting now, as 2014 marks the 100th anniversary of the beginning of the Great War. 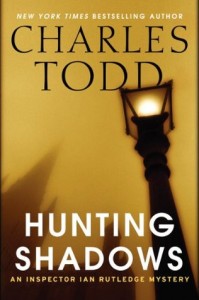 One of the many reasons I like the Inspector Ian Rutledge books is the fine job they do of depicting England in a fascinating time, those years just after World War I when the entire nation was, in a way, shell-shocked, dealing with the loss of huge numbers of young men and with sweeping changes in the long-established British way of life.

And one of the ways Charles Todd keeps the novels fresh is by having Scotland Yard send Rutledge into different locales to help solve the tough cases that overwhelm the local constabulary. The mother-son writing team obviously relishes visiting and researching new settings, and we readers are the beneficiaries. This time, Rutledge is dispatched to England’s Fen country, that low, marshy land in the east of England. Long ago, much of the fenland was drained for agriculture, and the terrain is dotted by windmills, making it resemble the Netherlands more than some other parts of England. The remaining marshes make for treacherous going. On what amount to small islands of higher ground are a number of villages, some of which have impressive churches or cathedrals.

The fogs, dangerous marshes and ancient windmills give Todd a suitably eerie backdrop for this murder mystery, and the people he encounters in the fens seem to harbor more than their share of secrets.

Rutledge is sent to the fens after two men, one an Army officer from London who’s a wedding guest, the other a solicitor running for Parliament, are gunned down in similar fashion within a couple of weeks, in neighboring villages. The weapon in both cases was a rifle, something that’s rare in England, and the shooter seems to have been as expert as a wartime sniper.

Investigations turn up no apparent connection between the two victims, but Rutledge strongly suspects there is something that links them, that the shootings are not the random work of a madman. His inquiries often lead him back to the recent war, refreshing the dark memories that are never very far from his own consciousness. In any event, it’s imperative to find the shooter before someone else dies.

Eventually, Rutledge finds possible help in a most unexpected person – although trusting that person could be disastrous for himself and the investigation.

Once again, Charles Todd has given us a fine mystery, as well as an enjoyable lesson in history and geography. And, as usual, the book also prompts reflections about the nature of right and wrong, justice and mercy.