A Lynley mystery – in Italy

Fans of Elizabeth George’s Lynley novels will differ, as they have since George killed off Lynley’s wife, about this latest book. It’s quite long, and it takes Lynley and his partner, Barbara Havers, into their first case outside England. The story is, in fact, more about Barbara than about Lynley.

I listened to the audio book, quite happily. The story swept me up quickly, and once I was hooked, the length was a plus. I didn’t want it to end. 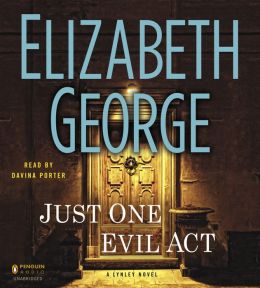 Those who have followed Elizabeth George’s bestselling mystery series featuring Scotland Yard Inspector Thomas Lynley have been through many of life’s ups and down with the urbane detective and his friends and associates.

Along with many other fans, I almost abandoned the books when Lynley descended into the depths of depression around the senseless murder of his beloved, pregnant wife, Helen. But as we do with family and old friends, I persevered, and George’s latest volume, the 18th, has made it worthwhile. This is a good book, with a complex plot that will keep you guessing, excellent character development, and thought-provoking insights into the nature of love and loyalty. The book explores what “one evil act” – even one that’s in some ways understandable – can set in motion.

Barbara Havers, Lynley’s unlovely, lower-class, bull-headed, passionate, longtime partner has a leading role in this novel. Hadiyyah, the 9-year-old daughter of her neighbor and friend, Taymullah Azhar, has been taken by her mother, whom Azhar never married. Despite already being in trouble at work, Barbara disobeys orders to help Azhar track them down. On her advice, Azhar hires a private detective.

Then Hadiyyah’s mother, Angelina, resurfaces in London with shocking news: Hadiyyah has been kidnapped from the marketplace in the Tuscan town where mother and daughter had been living with the mother’s Italian lover. She’s sure Azhar must have been involved.

Barbara, certain that Azhar didn’t even know where Hadiyyah was when the child disappeared for the second time, is determined to help him. When British officials are slow to act in what’s an Italian case, she charges into the situation, putting her career at risk in the process.

Azhar goes to Italy to help in the search. Soon, Lynley is dispatched to Italy to act as a liaison between the Italian police and the British citizens involved. And Barbara continues to try to find Hadiyyah and protect Azhar, even though her bull-in-a-china-shop tactics have many unintended consequences.

Barbara, is, in fact, maddening, to the reader as well as to Lynley and anyone else who cares about her. She also is entirely credible. “You don’t understand,” is her frequent refrain, and she’s right – often we don’t understand her intensity and apparent self-destructive behavior.

The book is quite long, which is one of several reasons I was glad I listened to the audio version. The story kept me going as I traveled many miles in my car.  I found that the intriguing plot propelled me happily through the 28-plus hours of listening time. It helps that George fully develops a number of the characters in Italy, as well as giving us deeper insights into the Havers, Lynley, Azhar and other London regulars we’ve come to know over the years. Lynley, as it turns out, is moving tentatively into a new romantic relationship.

At first, I was slightly annoyed by the occasional passages in Italian, which I probably would have just skipped if I’d been reading the print version. But since they were part of the recording, I listened to them, trying to pick out a word here and there. Eventually, I realized they are a part of the story, particularly after Barbara Havers rushes off to Italy. She doesn’t speak Italian, and the lead Italian detective speaks very little English. My frustrations with the passages I didn’t understand mirrored theirs.

George’s fans can be as passionate as Havers, and some haven’t forgiven her for killing off Lynley’s beloved Helen. I didn’t like that, either, but life has moved on for the characters.  Just One Evil Act is a good book for those who like character-rich stories that challenge your intellect and leave you thinking about the meaning of what you have read.

Davina Porter does a fine job of reading this audio version.