The Bennets – viewed from below

Jane Austen, who published her novels anonymously, cannot in her wildest dreams have imagined the life her works would have long after she was gone. There have been sequels, spoofs, spinoffs and retellings, movies, a mystery series starring Jane as the sleuth, the popular novel and movie The Jane Austen Book Club… And now, 200 years after Pride and Prejudice was first published, Jo Baker, a British novelist, offers yet another twist. 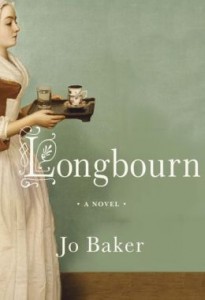 Jo Baker’s retelling of Pride and Prejudice from the below-stairs point of view is nothing short of brilliant.

Baker covers roughly the same time and many of the same events as Austen’s beloved tale of the Bennet family, but everything is seen through the point of view of the family’s servants.  One likes to think that Austen, who through the years has been praised for her irony as well as her realism, would appreciate the irony that the servants’ view of life at Longbourn has a decidedly different sort of realism than that offered in her genteel fiction.

Austen tells us about the balls, the walks across the fields, the dinner parties; Baker tells us about the laundry, the muddy shoes, the food preparation and the extra work generated by the social adventures of the Misses Bennet. Viewed through the eyes of the overworked housemaid, Sarah, even Jane and Elizabeth seem sometimes frivolous, occasionally thoughtless and certainly more earthy and physical beings than Jane Austen acknowledged. Even fine ladies have chamber pots, monthly rags to soak and scrub, and body odors.

While deftly showing the hard, sometimes grubby work needed to maintain the Bennets’ lifestyle, Baker does not belabor the upstairs-downstairs contrast. It is interesting, however, to realize how impoverished the Bennets think they are in comparison to their wealthier associates, and how vastly better off they are than Sarah and the younger maid, Polly, both of whom are in service because they are orphans. It is also interesting to be reminded that while the society folks in the neighborhood around Longbourn were dining, dancing and gossiping over who had how many pounds a year, soldiers and civilians were suffering and dying in the Napoleonic wars not far away on the Continent.

Baker does a wonderful job of retelling the familiar events from Pride and Prejudice as the servants would have experienced and understood them. Those laboring in the house, kitchen and stable see mainly what happens, without being aware of all the hopes, dreams and intrigue. They deal with all the extra preparations and entertaining connected with Jane’s wedding to Mr. Bingley and Elizabeth’s to Mr. Darcy, but they don’t know all the drama that led up to these happy occasions. They know learn, a little belatedly, about the scandal of Lydia having run off with Wickham, the militia officer, and they were already aware of his inappropriate behavior, but they don’t know the connections between Wickham and Darcy.

And, as she follows the beloved outline of Pride and Prejudice, Baker also gives us the stories of which the gentlefolk upstairs are mostly unaware – of Sarah, the footman James, the cook-housekeeper Mrs. Hill and her aging husband Mr. Hill, who acts as butler, groom or whatever else is needed. By simply telling about their lives, not overtly making a point, Baker shows us that the servants are people, too. And, as it turns out, they have compelling and often surprising stories.

Baker has taken some liberties, explaining in an author’s note, for example, that the footman, whom she gives a name as well as a major role and a gripping story, appears only once in Austen’s novel, delivering a note to Jane.

I have listened to all Jane Austen’s novels as audio books, and I found listening to Longbourn every bit as enjoyable. Emma Fielding, a distinguished British actress, does a fine job of reading, and, like so many Jane Austen fans, I’m a sucker for British accents. I just cannot create them properly in my head when I read to myself.

Listen to Longbourn, or read it yourself. It is obvious that Jo Baker, as she says in her author’s note, loves Pride and Prejudice and wrote this retelling out of that love, admiration and respect. This novel will enhance fans’ appreciation for Jane Austen’s enduring genius – and entertain them in the process.