From the bayous to Big Sky country

Bob Moyer has enjoyed James Lee Burke’s Davie Robicheaux  novels for quite a while now. His enjoyment continues with the latest entry in the series. 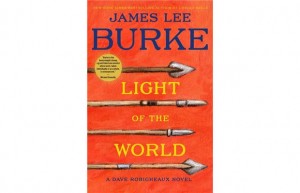 Everywhere he goes, there it is – the human condition. Whether he’s in his beloved bayous of Louisiana, or under the big sky of Montana, Deputy Sheriff Dave Robicheaux encounters evil, “…the tiger William Blake wrote about, burning brightly in the forests of the night, his brain dipped from a furnace and forged with a hammer and a chain. … the bane of us all, the trees lighting when he padded through the undergrowth, his guttural sounds a prelude of things to come.”

Shortly after Dave and his retinue – his wife, his daughter Alafair; his best friend, Clete Boyer; and Clete’s daughter, Gretchen – reach Montana, someone shoots an arrow that just misses Alafair. What’s supposed to be a vacation turns violent quickly. The tiger in this tale takes a little time to show himself, however. A profile in a pickup, a shadow around a corner, a rancid scent left in a room, scribblings on a cave wall – all these signs add up to a villain as evil as Alafair says he would be, and as evil as Dave feared.

As the antagonist prowls through the scenery, Dave and company get a lot of threats and little help. The sheriff shows little interest in helping the outlanders, and his deputies show up on a local billionaire’s payroll. The billionaire is the subject of a critical documentary being made by Gretchen; his minions make life miserable for her.

Matters get complicated when Gretchen also replaces Alafair as the target of the villain’s perverted affection. The narrative also gets complicated (and longer) because the author has added a second generation Robicheaux/Boyer Duo – Alafair, a recently graduated lawyer, and Gretchen, a reformed hit woman, have turned into an effective team. Of course, this creates another level of fear for Dave and Clete, as well as a whole new set of complications for the plot.

Gretchen adds her destructive demons to a list of Dave’s and Clete’s. She hasn’t exorcised her murderous instincts, just as Dave still sees “the dead of the world” when it rains, and Clete can’t keep away from damsels in distress, especially one whose smile is the Light of The World.

None of them can keep out of trouble. All of the plot complications coalesce lakeside, with a cadre of the billionaire’s cohorts and the fiend from Dave’s hell coming down on the two-generation crew. As usual, the voyage to the conclusion cruises through the evocative landscape of Montana and Dave’s mind; author Burke stays good at what he does so well with each new book in this venerable series.

Nobody does it better.