The return of Leaphorn and Chee

For years, I loved reading Tony Hillerman’s mysteries. I enjoyed them even more after I was able to spend some time in the Southwest, the setting for his books starring two Navajo Nation police officers. I was privileged to meet Hillerman when he spoke at Elon College and generously granted an interview that lasted more than an hour.

He was a goodhearted, fine man with a genuine respect for the Native American culture he wrote about. Among the many awards his books had won, he may have been proudest of the Special Friend of the Dineh award given to him by the Navajo Tribal Council in 1987. That says a lot, as does the fact that his novels are offered prominently for sale in stores on the reservation.

Hillerman suffered from cancer in his later years. His last few novels before he died in 2008 at age 83 were not quite as good as his earlier ones.

Hillerman was not Native American, but he was a journalist who took both his research and his respect for the Navajo people seriously.

His daughter, Anne Hillerman, also is a journalist. And now she’s had the courage to take up his beloved mystery series. 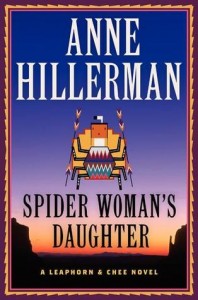 As a great fan of Tony Hillerman, I approached this first novel by his daughter, Anne, with mixed anticipation and trepidation. How wonderful it would be to travel again through fiction to the breathtaking, harsh terrain of the Southwest and read another satisfying mystery starring Leaphorn and Chee. But could anyone, even Tony Hillerman’s daughter, do justice to his characters and his series?

All a devoted fan really needs to know about this book is that the daughter has done her father proud.

Anne Hillerman has been faithful to her father’s series, bringing the aging, now retired Joe Leaphorn and the younger officer, Jim Chee, alive just as we remember them. She describes the lands on and near the Navajo Nation with an eye for detail like her father’s. And she’s crafted a good mystery with a believable conclusion and enough twists and turns to make getting there interesting.

After a breakfast with several police colleagues, Bernie is in the restaurant parking lot, talking on her cell phone, when she sees a shocking crime: Someone shoots retired Lieutenant Joe Leaphorn and then flees the parking lot in a speeding car.

As Leaphorn battles for his life in a hospital in Albuquerque, Bernie is ordered to take leave because she is too close to the crime to be part of the investigation. Of course, she’s not content to follow those orders, and she and Chee – he officially, she doing what she can – try to figure out who and why anyone would want to kill Leaphorn. Could it be someone he sent to prison years ago? Or someone he’s run afoul of in the insurance investigations he’s been doing since he retired? Or even Louisa, the professor the widowed Leaphorn has had a relationship with in recent years – and who now seems to have disappeared?

As Bernie and Chee try to track down the shooter, they, of course, risk danger themselves.

This is a good mystery, a fine addition to the Leaphorn and Chee collection. I await Anne Hillerman’s next book with anticipation only, no trepidation at all.