What a remarkable, haunting book. I have not read Khaled Hosseini’s best-selling earlier novels, The Kite Runner and A Thousand Splendid Suns, but I’ve now put them on my to-read list.

AND THE MOUNTAINS ECHOED. By Khaled Hosseini. Read by the author, Navid Negahban and Shohreh Aghdashloo. Penguin Audio. 12 CDs. $39.95. Also available in hardback from Riverhead Books. 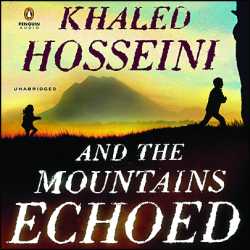 As this book begins, a father in Afghanistan is telling a folktale to his two children.  The tale, about a cruel ogre who takes away a little boy in exchange for not harming the rest of the boy’s family, seems chilling at first, but the ending is unexpected. Things are not as simple as they might seem.

The father who is telling the story is about to undertake a difficult journey to Kabul, where he will give his 3-year-old daughter, Pari, to a wealthy couple, in what he hopes is the right decision for everyone in his desperately poor family. The father intends to leave Pari’s brother, Abdullah, who is 10, at home, but Abdullah insists on going along on the trek. Abdullah has been the main one to take care of Pari since their mother died when she was born.  Their stepmother, who has already lost one baby to the terrible Afghan winter, has little time or energy for them.

The novel follows Pari and Abdullah through at traumatic separation, through their long years apart – as their lives follow very different paths – and to their reunion many years later. It also tells related stories of other people whose lives intersect in one way or another – there are the stepmother and her sister; the stepmother’s brother, who spends his life working for and then caring for the rich man who became Pari’s father; the spoiled wife, a poet, who gives up on Afghanistan and her marriage, taking Pari with her to Paris.

As the circles ripple outward, we also meet two Afghan expatriates who live in California; a Greek doctor who comes to war-ravaged Kabul to work with injured children; the doctor’s childhood friend, who still lives in Greece, and others.

In the background of all these stories is Afghanistan, an essentially tribal culture in a harsh land dealing with prolonged wars and foreign interventions.

And woven through all these stories is the idea of the ambiguity of life, the difficulty of knowing the right course. The novel has much to say about the importance and power of family, and about how decisions made and actions taken by one generation can have profound effects on those that follow.

The audio version is read by three narrators: Hosseini and a male and a female actor, Navid Negahban and Shohreh Aghdashloo. At first, the accents can be a bit hard to follow, but they quickly become part of the story, drawing the listener into a very different – and unforgettable – world.