No, to my knowledge, the frequent flyer Bob Moyer has not visited Oslo in recent months – except through the excellent fiction of Jo Nesbo. But that was quite a trip. 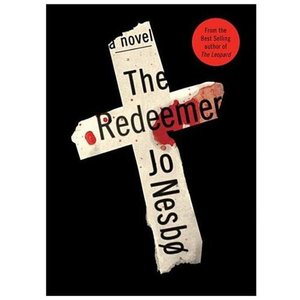 Harry Hole isn’t. THE REDEEMER, that is.  A number of characters in this tale, rife with moral ramifications, do have some claim to the title – a young assassin who survived the Serbian conflict, the father with a drug-addled son – but most everyone, including his new boss, believes Oslo detective Hole is beyond redemption. He certainly does. He’s an alcoholic; he’s socially inept; he’s abrupt with subordinates and disrespectful to his superiors; and he can’t live with his wife and son because of the life he lives. He does have one redeeming quality, however. He can solve crimes like nobody’s business.

The crime in this case (fifth in the series, but the latest in translation) concerns the death of a Salvation Army volunteer, standing in for his brother at a Christmas concert. Harry is consumed with the questions that emerge. Was the dead man the intended victim, or was it the brother?  Who is the assassin? Who hired the assassin? Is the assassin still in town? Can anyone save the drunks, the addicts and the homeless from the dark winter of Oslo and their lives?

Can he go any longer without a drink? Harry has gone looking for salvation through the bottom of a bottle before, and the view doesn’t look any better this time.

The current dean of Scandinavian mystery writers, Nesbo is not just a master of character development. He can push a narrative right along as well. A door knocked upon at the end of a chapter may open on another room in another country, another city.

The award-winning author devises a page-turning, cliff-hanging plot of coincidences worthy of a Thomas Hardy novel, spinning from street to street, country to country, through the politics of the Salvation Army and the Oslo Police down to a climax that redeems everyone – except Harry.  Of course. It’s Scandinavia.

This entry was posted in Mysteries and tagged Jo Nesbo, Mystery, Scandinavia. Bookmark the permalink.