W Is for Wonderful

The only bad thing about the arrival of Sue Grafton’s W Is for Wasted is the anxiety that arises because there are only three letters left in the alphabet. What’s she going to do with Kinsey Millhone after the series reaches Z? 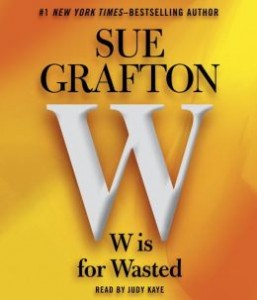 Sue Grafton’s alphabet series mysteries are always good, and W is one of the best.

It’s fall in Santa Teresa, Calif., and Kinsey is dealing with two dead men, whose lives and deaths seem to have no relationship.

One is a fellow local private investigator with whom she’s had as little to do as possible. He’s sleazy and lazy, the kind who feeds negative stereotypes of PIs. When he’s found shot to death on the beach near Santa Teresa, she’s neither particularly surprised nor particularly sad.

The other is an apparently homeless man, obviously ravaged by alcohol abuse, who’s found dead on the beach six weeks later. Kinsey wouldn’t even have known about that death except that the coroner found her name and phone number on a piece of paper in the dead man’s pocket.

With work slow at the moment and her bills caught up, Kinsey takes it upon herself to try to figure out the identity of the John Doe. Her quest opens her eyes to the homeless people who have long lived more or less invisibly in her beachside town of Santa Teresa. And, true to form, when she does figure out the identity of the dead man, she also finds a lot more than she ever expected. And gets involved in a lot more.

Meanwhile, Grafton from time to time reveals more of what the dead PI was doing in the weeks leading up to his murder. Faithful Grafton fans will suspect that the two plots will intersect eventually, but they’re unlikely to be able to predict the complex, fascinating and dangerous story that develops around that juncture.

In the course of the book, readers enjoy spending time with Kinsey and her friends – Henry, her aged but lively landlord; his eccentric brother William; an old boyfriend or two; an unexpected cat, to name a few. And, for an orphan and a lifelong loner, Kinsey’s acquiring quite the family circle – with all the attendant complications.

As for herself, Kinsey’s still the down-to-earth, resourceful, jeans-and-turtleneck clad scrappy gal she’s always been, with a strongly felt sense of ethics, more of an emotional soft side than is sometimes good for her, and no superhero powers.

Grafton started this series with A Is for Alibi 30-plus years ago, setting that book in 1982. She’s wisely kept time largely at bay, with Kinsey aging only a few years over the series, and this latest book still set in the 1980s. As a result, what in the early books seemed perfectly normal to ’80s readers seems pleasantly quaint now – Kinsey must drive out of her way to find a phone booth, she keeps her files on note cards and does research in public libraries. Occasionally, I find myself wondering if something – an ATM, perhaps – is true to the period. Whenever I check (using Google, of course, not a library reference book), I find that Grafton is right. I shouldn’t even bother to check.

The Kinsey Millhone books are great in print, but I find them an especially good choice for listening, especially on long car trips. They’re interesting and easy enough to follow. Judy Kaye is the voice on every audiobook in this alphabet series. She’s perfect; she is Kinsey Millhone in my head. I hope she’ll stick around for X, Y and Z.